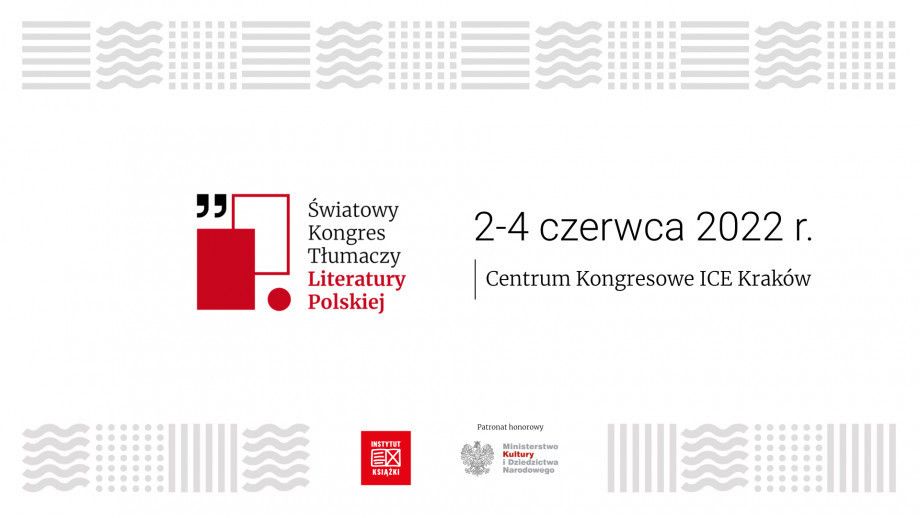 Tomorrow, Krakow will host the 5th World Congress of Polish Literature Translators, which will last from 2nd to 4th June. The event, organised by the Book Institute in a four-year cycle, will gather 500 participants, including 250 translators from over 50 countries - mostly from Europe, but also from North and South America, Asia, and Australia. It is a great celebration of Polish literature, honouring the efforts of those who work to translate and promote the works of Polish writers abroad. The event is held under the honorary patronage of the Deputy Prime Minister, Minister of Culture and National Heritage, Prof. Piotr Gliński.

As the participants themselves emphasise, this event is of particular value as it enables them to have a live and direct contact with Polish culture and language, to exchange experiences with other translators, to establish contacts with publishers and writers, and to learn about current phenomena and trends in Polish literature and language. Thanks to this, the Congress contributes to the creation of a community of people who care about Polish literature and who effectively promote it around the world.

The programme of this year's Congress includes 44 panel sessions and workshops - meetings with Polish authors representing various genres and literary styles, lectures by literary scholars, critics, and other figures of literary life. The writers invited to participate include Antoni Libera, Jan Polkowski, Maciej Płaza, Bronisław Wildstein, Dominika Słowik, Zbigniew Rokita, Wojciech Chmielarz, Martyna Bunda, and Jacek Dukaj. The event will be accompanied by presentations of the publishers' latest offerings, as well as an exhibition of illustrations for children featuring works by prominent Polish artists.

The Congress will open with a solemn plenary session and will culminate with the Transatlantyk Award Ceremony - an award granted annually by the Book Institute to one of the most outstanding ambassadors of Polish literature abroad. Due to the pandemic, three laureates will receive statuettes during the Transatlantyk Award gala this year - Professor Ewa Thompson from the USA (for 2020), Professor Tokimasa Sekiguchi from Japan (for 2021), and this year's laureate, whose name will be announced during the ceremony. This award will be presented for the eighteenth time.

For the first time in the history of the Congress, translators who cannot come to Krakow will participate online, thanks to which the event will also be followed by, among others, translators from Ukraine, Australia, and the United States.

The congress will begin on 2 June at 9:30 a.m. The official welcome by Dariusz Jaworski, Director of the Book Institute, will be followed by the presentation of the Gloria Artis Medals for Merit to Culture, and an inaugural lecture by Professor Włodzimierz Bolecki.

The first block of meetings will last from 11:20 to 12:35. It will include, among other things, two panel discussions in the series 'The Authors and Their Translators'. One panel will feature Jan Polkowski and translators dealing with his work (Amelia Serraller Calvo, Constantin Geambaşu, and Charles S. Kraszewski). The second panel will be devoted to Antoni Libera and his translators Lajos Pálfalvi and Anat Zajdman.

During the second block of events (13:35-14:50), it is worth paying attention to Małgorzata Ciunovič's lecture devoted to new phenomena in Polish language, as well as a meeting from the "100 questions to..." series, in which Maciej Płaza and Andrzej Muszyński will take part. The third block, lasting from 15:10 to 17:10, will consist entirely of a 'mini' book fair, during which translators of Polish literature will be able to meet and talk to publishers.

A detailed programme of the event can be found on the website: www.kongrestlumaczy.com

The World Congress of Polish Literature Translators is held under the honorary patronage of the Deputy Prime Minister and Minister of Culture and National Heritage, Professor Piotr Gliński.

Next: The World Congress of Polish Literature Translators has begun Back to list