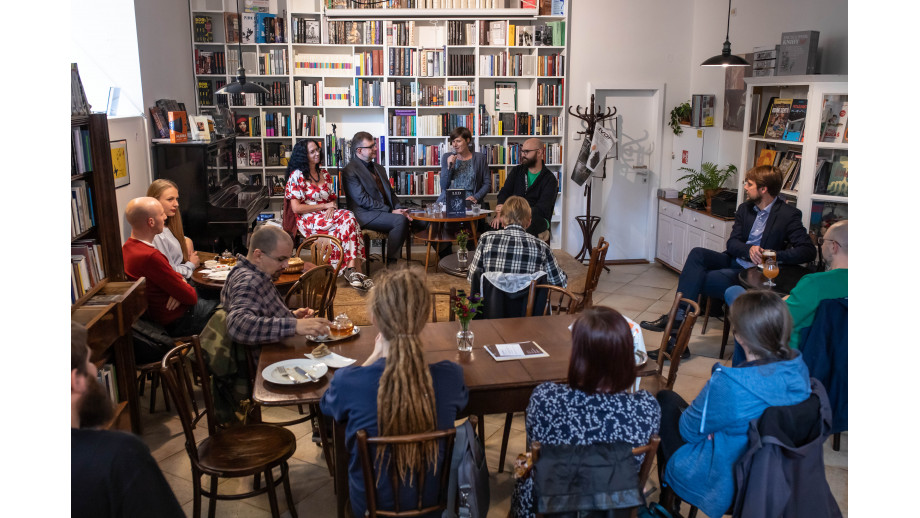 Two meetings of Czech readers with Jacek Dukaj took place in Prague on Tuesday 20 September and Wednesday 21 September. The reason for this was the Czech translation of one of the author's most important novels, Lód (“Ice”). Both events met with great interest from the audience.

The first meeting, which took place at the Božská Lahvice club café in Prague, was hosted by Czech writer Přemysl Krejčík. Michala Benešová, the translator of Ice into Czech, also participated in the meeting. It is worth mentioning that her translation - which she worked on in a duet with Michael Alexa - not only received a favourable reception from readers in the Czech Republic, but also in April, it won the most prestigious literary award in the Czech Republic, the Magnesia Litera.

On Wednesday 21 September, a meeting of the 'Night of Literature' series took place, during which an excerpt from the novel Ice, translated into Czech, was read by the actor Michal Lurie. This took place at the headquarters of the Order of the Knights of Malta (Velkopřevorské nám. 4, Prague 1).

Throughout his stay in Prague, Jacek Dukaj also received a lot of attention from the Czech media. Interviews with the writer were conducted by journalists from the daily newspaper “Deník N”, the weekly “Respekt”, Czech “Radio Wave” and “Radio Vltava”, the website “Seznam Zprávy”, the cultural biweekly “a2”, and the website dedicated to books Iiteratura.cz.

As part of the ©POLAND Translation Programme, Michala Benešová has introduced Czech readers not only to Dukaj's novel, but also to the reportage Izrael już nie frunie (“Israel No Longer Flies”) and Irak. Piekło w raju (”Iraq. Hell in Paradise”) by Paweł Smoleński (2013 and 2015, both in tandem with Lucie Zakopalova), Toast za przodków (”A Toast To The Ancestors”) by Wojciech Górecki (2017), Sprawiedliwi zdrajcy. Sąsiedzi z Wołynia (”Righteous Traitors. Neighbours from Volhynia”) by Witold Szabłowski (2017), Modlitwa o deszcz (”Praying for Rain”) by Wojciech Jagielski (2018), Cwaniary (”The Hustlers”) by Sylwia Chutnik (2014), Niesamowite przygody dziesięciu skarpetek (czterech prawych i sześciu lewych) [”Amazing Adventures of Ten Socks (Four Right and Six Left)”] by Justyna Bednarek (2017), and Król (”The King of Warsaw”) by Szczepan Twardoch (2020).

The meetings are organised by the Book Institute and the Polish Institute in Prague.

Next: From the Polish Land to Italy. Polish literature in Italy 1991-2021. Conference in Bertinoro under the patronage of the Book Institute Back to list