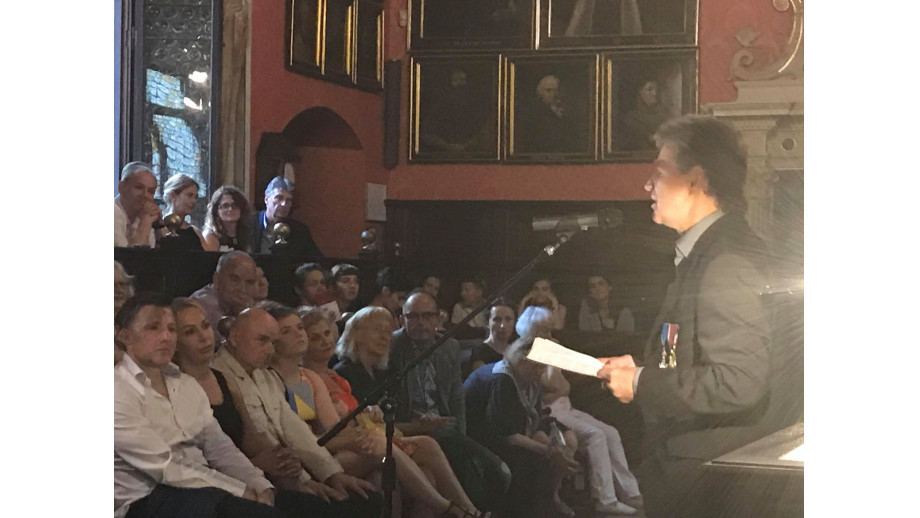 The honour was awarded today at the Jagiellonian University Museum of Collegium Maius in Cracow. This year, Transatlantyk was awarded for the fifteenth time.

"The Transatlantyk Award is granted to foreigners, but they are foreigners by birth, not by spirit," said Dariusz Jaworski. Director Jaworski also read a letter from Professor Piotr Gliński, Minister of Culture and National Heritage.

"This award is a great honour for me and for small Estonia. This is one of the most important days of my life. (...) I apologise for my Polish. Estonian language is very different from Polish. I don't know virtually any Estonian who speaks any Slavic language. I think that a translator of Polish literature does not have to speak Polish well, a translator has to translate well," said the winner, receiving the award.

"Hendrik is the ambassador of the Polish cause to Estonia. Were we to sum up his role of telling Estonians about Poland in one word, it would be the Latin pontifex," said Sławomira Borowska-Peterson from the Polish Embassy in Tallinn in a touching commendation.

Martin Roger, Ambassador of the Republic of Estonia, said "To me, Hendrik is almost a mystical figure. He shows that anything is possible. (...) Hendrik is happy with every sentence he translates, every book. It seems to me that without this joy, there would be no quality. (...) Estonians and Poles deserve to get to know each other better, and nothing helps this better than literature. We, Estonians, are proud of you.”

Hendrik Lindepuu (b. 11 XI 1958) is one of the most outstanding translators, acquainting foreign readers with Polish literature. His translations of more than 50 books have been published in Estonia, and he has also translated 70 theatrical plays. Lindepuu is a true one-man-institution. It is largely thanks to him that contemporary Polish literature is present in Estonia, as not only does he translate it, but he has also been publishing it in the publishing house Hendrik Lindepu Kirjastus since 2003.

He began his translation career by translating theatrical plays. It was his interest in Polish theatre and film that led him to buy a textbook to learn the Polish language in the spring of 1984. Already three years later, he spoke Polish fluently enough to start translating - in March 1988, the Estonian premiere of Ireneusz Iredyński's play Żegaj, Judaszu (“Farewell Judas”), translated by Lindepuu, took place.

His translations of poetry are the most appreciated. In 2009, the Estonian Cultural Foundation awarded Hendrik Lindepuu the annual Kultuurkapital Literary Award, the highest literary prize in Estonia, for Wiersze wybrane ("Selected Poems") by Tadeusz Różewicz and other translations. In 2015, he was one of the five laureates of the Estonian National Award for Culture and Art for creative achievements in 2014. The Republic of Poland awarded Hendrik Lindepuu for his merits Złoty Krzyż Zasługi (“Golden Cross of Merit”, 2005) and Krzyż Kawalerski Orderu Zasługi (“Knight's Cross of the Order of Merit”, 2009).

Transatlantyk Award is an annual award from the Book Institute for an eminent ambassador of Polish literature abroad. The winner may be a translator, a publisher, a critic, or an animator of cultural life.

So far, this prestigious award was given to such outstanding personalities as Anders Bodegård, Albrecht Lempp, Ksenia Starosielska, Biserka Rajčić, Pietro Marchesani, Vlasta Dvořáčková, Yi Lijun, Karol Lesman, Bill Johnston, Laurence Dyèvre, Constantin Geambaşu, and Lajos Pálfalvi. Last year, the Transatlantyk was awarded to Antonia Lloyd-Jones, one of the most eminent translators of Polish literature in the world, the author of over a hundred translations from the Polish language, whose rich and extremely versatile output includes, inter alia,  novels by Jacek Dehnel, Paweł Huelle, Jarosław Iwaszkiewicz, Zygmunt Miłoszewski, Żanna Słoniowska, and Olga Tokarczuk. Lloyd-Jones also received twice the prestigious Found in Translation Award: for her translation of Paweł Huelle's Ostatnia wieczerza (“The Last Supper”, 2009) and for her lifetime achievement (2012).

This year, the winner will be chosen by a jury composed of Dr Stanley Bill, Prof. Lajos Pálfalvi, Prof. Ewa Thompson, Prof. Maciej Urbanowski, Prof. Alois Woldan. The jury is chaired by the Director of the Polish Book Institute, Dariusz Jaworski.