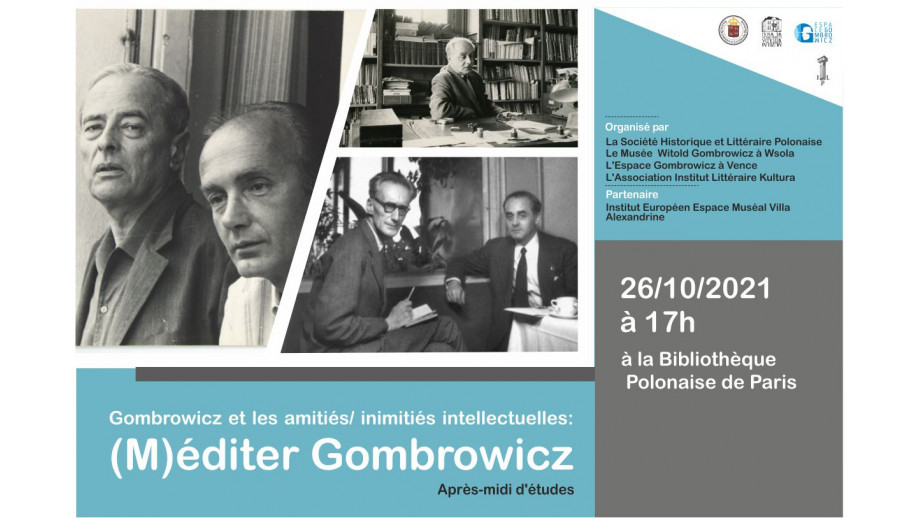 Gombrowicz in Paris and Berlin

The participants of the Paris conference "M(éditer) Gombrowicz" will discuss the writer's difficult relations with publishers and promoters of his books.

The panel is organised by the Witold Gombrowicz Museum in Wsola and its branch in Vence, France, as well as by the Polish Library in Paris.

"This is the first stage of the +Gombrowicz and (non) friends+ series," announced Tomasz Tyczyński, the head of the museum in Wsola. He added that the conference would be attended by experts in the works of the author of "Ferdydurke". Rita Gombrowicz, the writer's widow and curator of his works, has also announced her participation.

The organisers stress that an integral part of Gombrowicz's creative activity was the struggle for fame. "The writer understood perfectly well that, coming from a peripheral culture, he constantly had to face and confront the recognised cultural centres," Tyczynski noted. He added that the author of Transatlantyk (“Trans-Atlantyk”) fought for his literary existence especially in France, which is very specific in this respect.

"As one of the most important commentators on his own work, Gombrowicz tried not to leave to chance the questions related to his existence in world literary life. Translators and publishers were important (non)friends in these endeavours," noted the head of the museum in Wsola.

Tyczyński emphasised that discussions on Gombrowicz's work have taken place in Wsola on many occasions. "Now, we are also increasingly involved in organising events outside the country. Due to the biography of the writer, in Europe, it is mainly France and Germany," Tyczynski pointed out.

Next month, events devoted to the Polish writer will continue in Berlin, where Gombrowicz spent a year thanks to the Ford Foundation scholarship.

An outdoor exhibition dedicated to the writer is scheduled to open on 7 November. This is one of the highlights of the series "Gombrowicz in Berlin", which has been running since May and which included the unveiling of a commemorative plaque on the wall of the building in which the writer lived for some time during his year-long stay in Berlin.

The Berlin events are organised by the Pilecki Institute, in cooperation with the Witold Gombrowicz Museum and with the support of the Ministry of Culture, National Heritage and Sport.

Witold Gombrowicz came to West Berlin in 1963 on a one-year scholarship from the Ford Foundation. It was his first stay in Europe after many years of emigration in Argentina, where he arrived on the Polish transatlantic liner MS Chrobry in 1939, just before the outbreak of the Second World War. After living in Germany, the writer moved to France, where he settled permanently in Vence, near Nice. He died in 1969.

Next: "Zdrój" by Barbara Klicka in Swedish with the support of the Book Institute Back to list