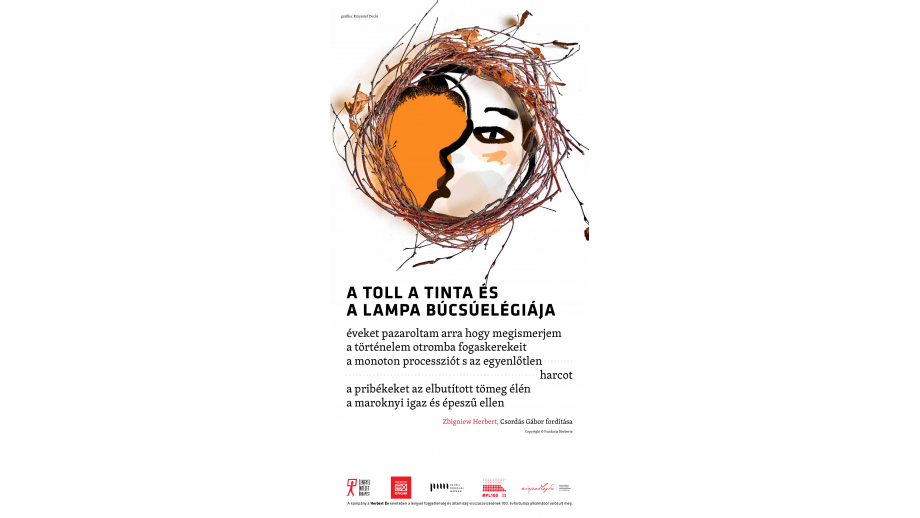 Director of The Book Institute, Dariusz Jaworski, about Herbert on the Budapest Metro: "We are entering the space of everyday life with Polish high literature."

“With the promotion of Polish literature on the Budapest and London underground, we are entering the space of everyday life with Polish high literature," said Dariusz Jaworski, Director of the Book Institute, to the Polish Press Agency yesterday. “Literature has always demanded its presence on a wider scale," he added.

PAP (Polish Press Agency): In a moment, you will inaugurate the campaign "Poems on the underground" on the Budapest Metro, prepared by the Book Institute and the Polish Institute. What is the idea behind it?

Dariusz Jaworski: The idea behind the campaign "Poems on the Underground" is to present ten excerpts of different poems by Zbigniew Herbert in a beautiful graphic arrangement at the stations of three lines of the underground, on several hundred posters. They will be seen and read by people who travel by underground train. This is the second stage of our entrance with Polish high literature in the space of everyday life. Slightly earlier, for two weeks, on 5-18th November, we presented Polish poetry on over 1600 posters on the London underground – an excerpt from Adam Mickiewicz's "Pan Tadeusz", one of the excerpts of Zbigniew Herbert's poems, and one excerpt of Jarosław Marek Rymkiewicz's poems. It was a symbolic complement to the 3-year project of Poland's presence at the London Book Fair - one of the two most important events of this type in the world. The project was initiated in 2016, and it reached its peak in 2017 when Poland appeared at the fair as a guest of honour. In 2018, we symbolically end this period, although, as a matter of fact, we will never end this presence and activity.

Literature is still an elite sphere and has always demanded its presence on a wider scale. We are pursuing this assumption by presenting the most eminent Polish poets. Of course, this circle could be expanded, for example by including our Nobel Prize winners, but they already have their position on the market, the British one as well.

PAP: Why did you choose London and Budapest? Does this, in some sense, reflect the most important directions for the Institute?

Dariusz Jaworski: In London, we emphasised the presence of our literature in the world. Let's be honest, the English-language market is important, although we try to approach all regions with equal assiduity. We realise that the presence in the English-speaking space is a pass to an easier permeation in the publishing world.

And Budapest is very culturally and historically close to us, and I don't have to explain why. Let's hope it's a good start, because it's all about good ideas, but equally about implementation, organisation, and financial possibilities, and the cooperation with the Polish Institute there is excellent.

PAP: Do such campaigns really contribute to the greater popularity of Polish authors?

Dariusz Jaworski: I believe so, and I think it can also be proven empirically. However, how much of this content remains in the consciousness, sometimes of an accidental recipient, we obviously do not know. It is impossible to measure it - the message will reach someone and interest them, discourage others, and someone else will find out that there is a country that had such a poet.

It should be remembered that we do not detach such campaigns from our other activities. They are connected with our presence at the book fairs and translation programmes. All activities must work together.

PAP: What other non-standard ways can be used to promote Polish literature around the world?

Dariusz Jaworski: When we talk about non-standard activities, we mean those that nobody else, and certainly their addressees, would not be able to come up with. Of course, I believe that we should follow this path and sometimes surprise the audience, because non-standard is a value, but, in the end, the most important thing is systematic, earnest, organic work, only that it does not always give spectacular results.

However, its effects are much more permanent. We have some new ideas, and we are continuing with those that work. For the time being, I would not like to reveal these plans, because the competition never sleeps, and, as we know, something non-standard is always spectacular when it is first. In addition, people get attached to the announcements, and I am afraid that we may not find the right partner for our actions. I am also not sure about the resources that we will have; therefore, I prefer to talk about these projects when we are prepared for them in every respect.

The Book Institute is a co-creator of a publishing series which is being created in cooperation with the Wacław Felczak Foundation and the Rézbong publishing house. The series includes books by Marta Kwaśnicka, Ryszard Legutko, Sergiusz Piasecki, Krzysztof Szczerski, and Marcin Świetlicki. The Book Institute Programme Council includes Lajos Pálfalvi: translator, Slavic lecturer at the Péter Pázmány Catholic University, an outstanding populariser of Polish literature in Hungary, a winner of the Transatlantyk Prize 2017.

As part of the ©POLAND Translation Programme, in Hungary, there will soon be released works by a number of outstanding Polish authors: from Janusz Korczak, through Stefan Żeromski and Sergiusz Piasecki, to Czesław Miłosz.

Below is a gallery with exerpts of Zbigniew Herbert's poems, which will be presented on the Budapest Metro.

Next: Instytut Książki na EUROLIS Seminar 2018 Back to list