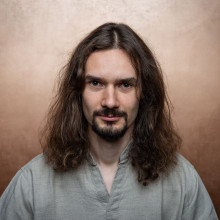 He made his debut with the novel Kocham cię, Lilith (“I Love You, Lilith”, 2014). He is known for the project Legendy polskie. Allegro (”Polish Legends. Allegro”) realised by Powergraph and Allegro. His second novel, Puste niebo (“The Empty Sky”, 2016), earned him the Gold Honourable Mention of the Jerzy Żuławski Literary Award and a nomination for the Janusz A. Zajdel Award. He celebrates life, his beloved wife, good tea, and the mountains.

His third novel, Baśń o wężowym sercu, albo wtóre słowo o Jakóbie Szeli (”A Tale of a Serpent's Heart or a Second Word About Jakób Szela”) was published in 2019, for which he received the 2020 NIKE Literary Award, the Janusz A. Zajdel Polish Fandom Award, and the Jerzy Żuławski Literary Award. The book was also nominated for the Gdynia Award. The author was named the Creator of the Year 2020 by the magazine "Nowa Fantastyka" and also, as the Creator of the Year, he received the statuette of Śląkfa of the Silesian Fantasy Club. The film rights to A Tale of a Serpent's Heart have been sold, and a theatrical adaptation of the novel is also planned.