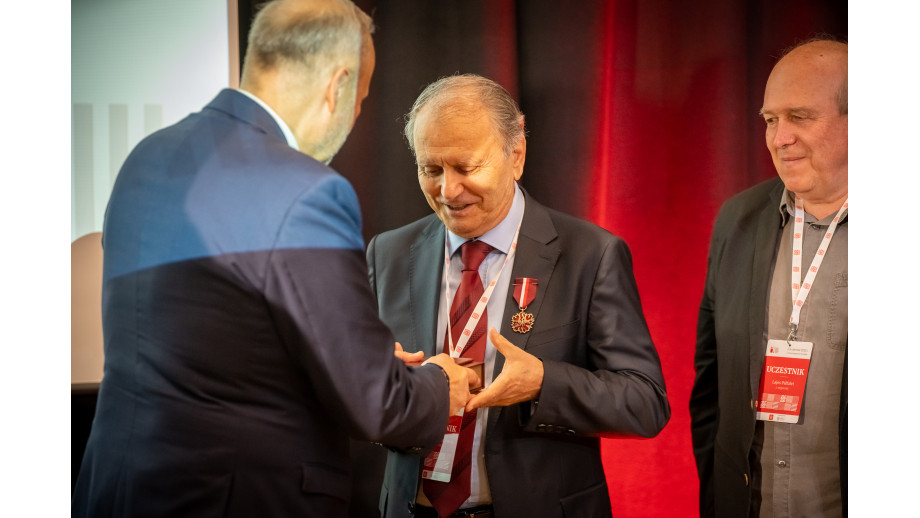 The World Congress of Polish Literature Translators was inaugurated on Thursday. The event was highlighted by the presentation of bronze Gloria Artis Medals for Merit to Culture to two distinguished translators of Polish literature into foreign languages. The Medals were presented to Constantin Geambaşu from Romania and Lajos Pálfalvi from Hungary. Both translators have contributed significantly to the presence of Polish literature in their respective countries.

Constantin Geambaşu (born in 1948) is an eminent Romanian translator, Slavist and Polish language scholar, affiliated with the Department of Polish Literature at the University of Bucharest for most of his life. Geambaşu is a laureate of the Transatlantyk Award for outstanding achievements in the promotion of Polish literature in the world (2016), as well as an honorary doctorate from Jagiellonian University (2020). He is also a laureate of the "Polonicum Award" for outstanding achievements in promoting the Polish language and knowledge of Polish language and literature. He has translated a considerable number of important works of Polish literature, including Stanisław Lem's Solaris, Juliusz Słowacki’s Kordian, Stanisław Wyspiański’s Wesele (“The Wedding”), Adam Mickiewicz’s Sonety krymskie (“Sonnets from the Crimea”), Zbigniew Herbert’s Pan Cogito (“Mr Cogito”), as well as Czesław Miłosz’s Zniewolony umysł (“The Captive Mind”), Rodzinna Europa (“Native Realm”), and Ziemia Ulro (“The Land of Ulro”). He devoted many years to studying the work of Maria Dabrowska.

Lajos Pálfalvi (born 1959) is a Hungarian translator, teacher, as well as historian and literary critic, who during his career has worked at, among others, the Loránd Eötvös University in Budapest and the Jagiellonian University in Krakow. Thanks to Pálfalvi's translation work, Hungarian readers had the opportunity to become acquainted with such important works of Polish literature as Bakakaj (“Bacacay”) by Witold Gombrowicz, Madame by Antoni Libera, Wampir. Biografia Symboliczna ("Vampire: A Symbolic Biography") by Maria Janion, Początek (”The Beautiful Mrs. Seidenman”) by Andrzej Szczypiorski, Gra na wielu bębenkach (”Playing on a Multitude of Drums”) by Olga Tokarczuk, Nagrobek z lastryko (”Terrazzo Tombstone”) by Krzysztof Varga, and a number of Czesław Miłosz's books, such as The Captive Mind, Native Realm, and The Land of Ulro. Pálfalvi is also a laureate of the award "For the promotion of Polish books in the world" granted by the Polish Culture Foundation (2013) as well as the Transatlantyk Award granted by the Book Institute (2017).

Let us recall that the World Congress of Polish Literature Translators is organised by the Book Institute in a four-year cycle. It brings together 500 participants, including 250 translators from over 50 countries - mostly from Europe, but also from North and South America, Asia, and Australia. It is a great celebration of Polish literature, honouring the efforts of those who work to translate and promote the works of Polish writers abroad.

The event is held under the honorary patronage of the Deputy Prime Minister, Minister of Culture and National Heritage, Prof. Piotr Gliński.

Subsidised by the Ministry of Culture and National Heritage.