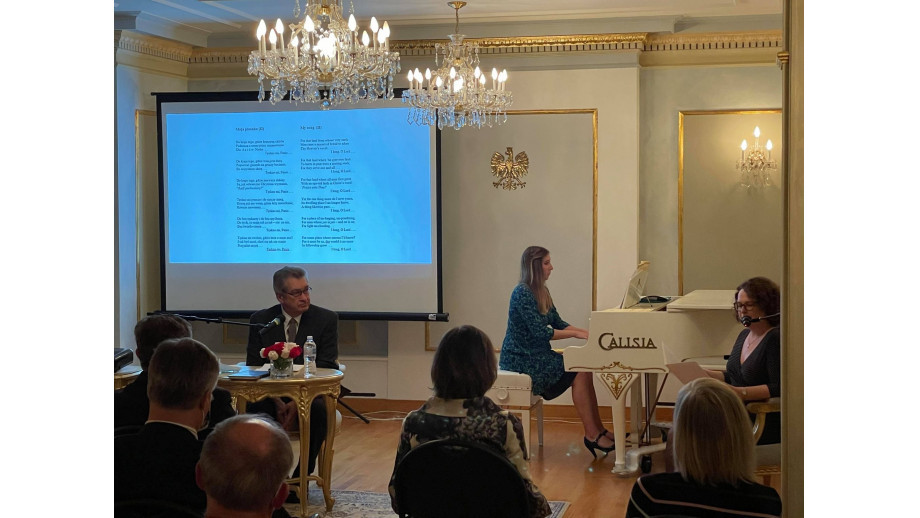 See Archive
Tags: Embassy of the Republic of Poland in Ottawa, Year of Norwid
share

The Year of Norwid in Ottawa

On October 15, a multidisciplinary event entitled "Cyprian Kamil Norwid - A Polish Poet of Today" took place at the Embassy of the Republic of Poland in Ottawa. The event marked the 200th anniversary of the birth of Cyprian Kamil Norwid and the Year of Norwid in collaboration with the Slavic Research Group of the Department of Modern Languages and Literatures at the University of Ottawa.

The programme of the event included a lecture on the life and work of the artist given by Professor Richard Sokoloski, Director of the Slavic Research Group, a screening of the short film 'Vade-mecum' directed by the Quay Brothers, which was made available by the Polish Institute in London and the Book Institute, Canadian premiere of new English translations of Norwid's poems by Professor Richard Sokoloski  (Moja piosnka ["My Song"], Nerwy ["Nerves"], Przeszłość ["The Past"], Do obywatela Johna Brown ["To Citizen John Brown"] - the recitation of the poems was complemented by musical accompaniment by pianist Jenny Richards of the Ottawa Chamberfest, who presented works by Frederic Chopin), as well as the exhibition entitled “Poetry and Kindness", prepared by the Ministry of Foreign Affairs in cooperation with the Adam Mickiewicz Museum of Literature in Warsaw.

The event was held in a mixed format - with audience participation and live streaming via the facebook page of the Polish Embassy in Ottawa. As part of the provincial regulations governing the organisation of public events, 25 people attended directly, including EU Ambassador Melita Gabrič, Estonian Ambassador Kārlis Eihenbaums, representatives of the diplomatic corps in Ottawa, members of the Polish community, students of the University of Ottawa and Carleton University, and Canadians interested in Polish culture.

A webcast of the event is available at the link below:

Next: 105 lat temu urodził się Kazimierz Brandys Back to list