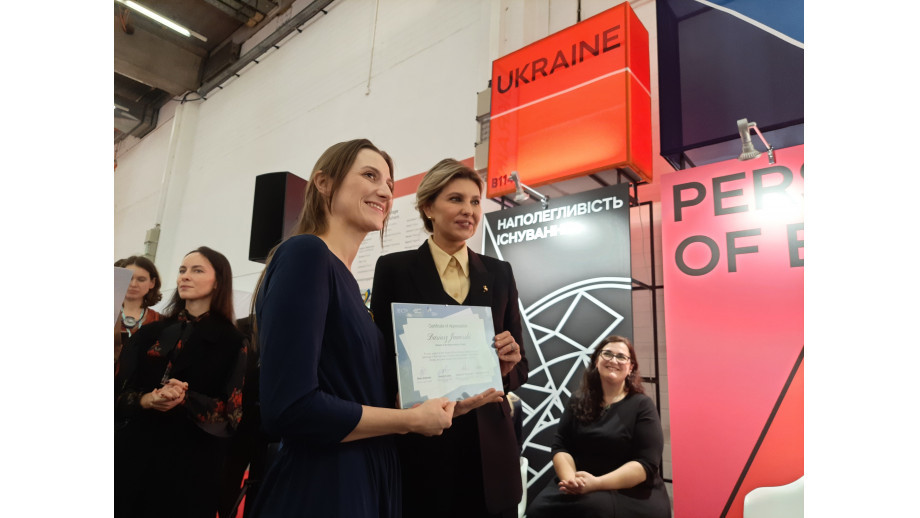 The Book Institute awarded by Olena Zelenska at the Frankfurter Buchmesse

The First Lady of Ukraine honoured Director Dariusz Jaworski and the entire Book Institute for the help we have been trying to provide to Ukrainians and Ukrainian literature since the beginning of the war. The award at the Frankfurt Book Fair was accepted on behalf of the Book Institute by Łucja Gawkowska.

On Friday 21 October, the Ukrainian stand at the Frankfurt Book Fair hosted the First Lady of Ukraine, Olena Zelenska, who, together with representatives of the Ukrainian Ministry of Culture, the Ministry of Foreign Affairs, the Ukrainian Book Institute, and the European Publishers Federation, presented projects aimed at supporting Ukrainian books at a difficult time for the country: Ukrainian Bookshelf and Books Without Borders. The Book Institute was among those honoured for its special contribution to helping our neighbours.

The Book Institute received the award from Olena Zelenska for a whole range of activities in support of Ukraine, notable among them were the donation to libraries of books translated as part of the ©Poland Translation Programme, the purchase of books for children and young people as part of the 'Give a book to Ukrainian children' project, direct help to Ukrainian authors and publishers, supporting festival events related to the subject of Ukraine, and, last but not least, printing books in Ukrainian.

In her speech, the First Lady of Ukraine said that it is the book that can be the thing that shortens the distance between refugees and the country they had to leave. According to her, it is literature and culture at large that constitutes the soul of a nation. Zelenska also expressed pride that publishers from the bombarded city of Kharkiv were able to attend the Frankfurt Book Fair and emphasised that Ukrainians perfectly understand the need to promote their culture internationally, even in this most difficult time.

"A child who has to flee the country often cannot take anything with them, their childhood has been taken away from them. Hence the special importance of the presence of books in Ukrainian in countries of refuge," stressed Olena Zelenska.