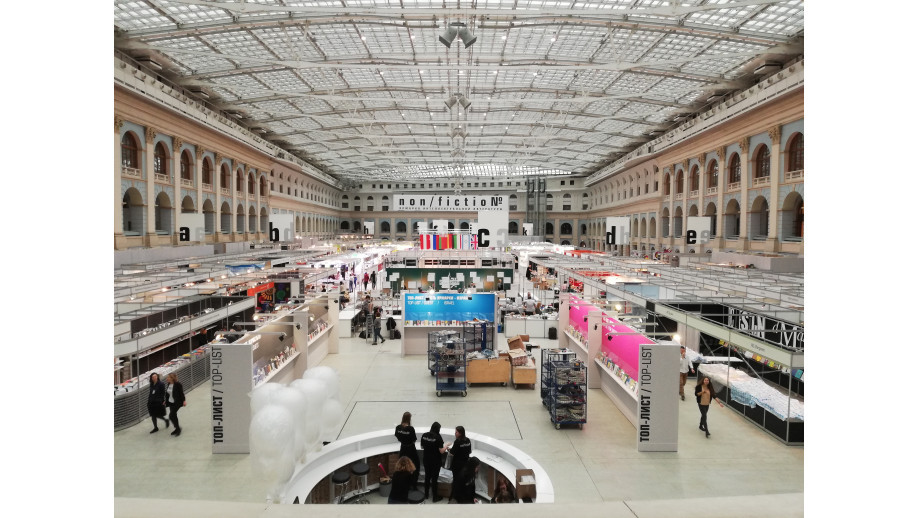 The Book Institute at the International Non/fiction Fair in Moscow

On Thursday, 5th December, the 21st International Book Fair Non/fiction in Moscow began. The most important international trade event in the Russian book market, gathering several hundred exhibitors and thousands of enthusiasts of ambitious literature for adults and children, took place for the first time in Moscow's Gostiny Dvor near the Red Square. The Polish Non/fiction stand is traditionally organised by the Book Institute with the support of the Polish Institute in Moscow.

At its 12 sq. m. stand, the Book Institute presented new publications from the "New Books from Poland 2019" catalogue. A distinctive place at the stand was occupied by a special exhibition of foreign editions of Olga Tokarczuk's books, where all translations of the Nobel Prize winner's books into Russian were available. The Nobel Prize for Literature for Olga Tokarczuk is a good opportunity to remind people of other Polish Nobel Prize winners whose books have been published in many countries around the world with the support of the ©Poland Translation Programme over the 20 years of the programme's existence. As a final touch on the closing of the Year of Gustaw Herling-Grudziński, the Book Institute showcased world and Russian translations of the writer's works, whose fate was particularly tragically connected with Russia.

This year, following the practice of the Book Institute at the largest international book fairs – in Frankfurt, London, and Bologna - the Institute announced a pilot acquisition of exhibition space in Moscow for Polish publishers of children's books. This segment of literature is playing an increasingly important role at Moscow's Non/fiction fair, and the work of Polish illustrators is enjoying a steadily growing reputation among professionals and readers in Russia. Adamada and Muchomor publishing houses responded to the Book Institute's offer. Their books were showcased at the Polish stand in Gostiny Dvor.

Traditionally, the Polish stand was accompanied by a literary programme, which this year was organised entirely by the Polish Institute in Moscow. Marcel Woźniak and Nina Fiodorova, a translator, reminded the Russian audience of the recently reissued translation of Leopold Tyrmand's Zły ("Bad") translated by Ksenia Starosielska and Nina Fiodorova (Sunday, December 8, at 3:00 p.m.). As part of the Herling-Grudziński Year, Irina Krawiecova from Ivan Limbach publishing house, poet and journalist Elena Fanajlov, and historian Konstantin Lvov presented a Russian translation of Inny Świat ("The World Apart") at 5 p.m. Lastly, Anastasia Wiekszina, a translator and Polish Institute expert in Moscow, presented a Russian translation of Józef Czapski's Lekcja o Prouście ("Lessons about Proust") and a bilingual edition of his anthology of Polish wartime poetry (6 p.m.). All these events took place at the Polish stand.

Additionally, as part of the illustration programme of the Non/fiction fair, on Sunday, December 8th, in the amphitheatre of the Guest House (11:45 a.m.), a lecture was delivered by Piotr Socha, whose Pszczoły (" The Book of Bees") and Drzewa ("The Book of Trees") with the support of the ©Poland Translation Programme were published in Russia by the Publishing House Samokat.

The Moscow fair will last until Monday, December 9th.