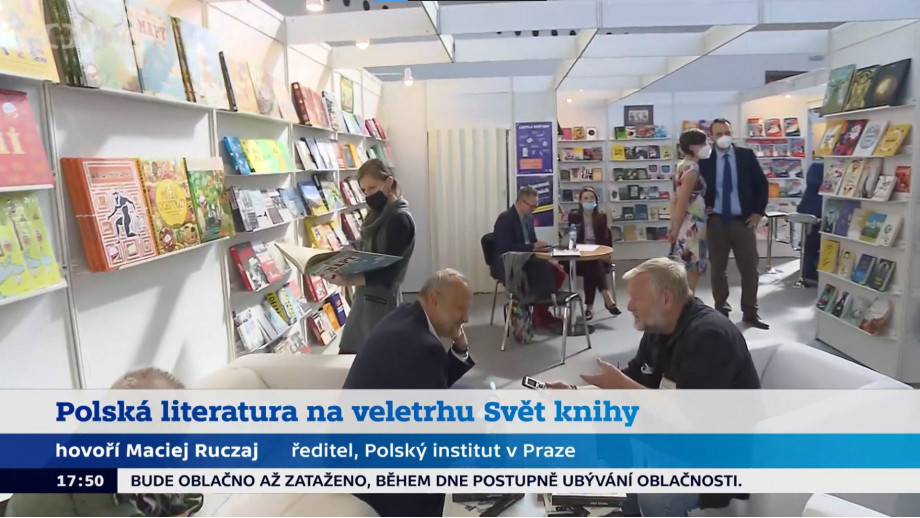 Svět knihy in Prague: meetings with Polish writers, presentation of books and catalogues

In Prague, at the Book World (Svět knihy) International Book Fair, a presentation of Polish books presented in the catalogues "New Books from Poland" and "Polish Books for Children & Young Adults" took place at the Polish stand, co-organised by the Book Institute and the Polish Institute in Prague.

At the stand, one could purchase Czech editions of books by Polish writers, as well as books in the original language version. In addition, many titles in Czech could be found on the stands of Czech publishers.

The programme of the presentation of Polish literature also attracted a lot of interest from the Czech media. Czech Television's news channel ČT24 has aired extensive news story on the Polish section of the Prague fair and festival: www.ceskatelevize.cz (from 9:13).

Jack Fairweather, British reporter, author of the book The Volunteer: The True Story of the Resistance Hero Who Infiltrated Auschwitz was invited to the popular Czech TV programme "Hyde Park". During the meeting with readers, he revealed that a film devoted to the Captain Pilecki will be produced on the basis of his book.

Meetings with Witold Szabłowski, Tomasz Rożek, and Martyna Bunda were very popular. All meetings took place on Saturday. Polish authors were accompanied by Czech authors: Tomasz Rożek met with Václav Cílek - geologist, climatologist, and philosopher, Martyna Bunda participated in a discussion with Czech writer Karin Lednicka, author of the widely read two-part novel Šikmý kostel", whereas the meeting with Witold Szabłowski was hosted by the popular Czech journalist and musician Petr Vizina. Awards were granted to the winners of a competition for a comic book inspired by the works of Stanisław Lem.

On Saturday evening, a concert of the band Hańba! took place on the stage of Gauč ve Stromovce, which was warmly welcomed by the Czech audience.  The audience was treated to a mixture of punk, folk, and klezmer music accompanied by the lyrics of interwar poets.

It is worth mentioning that a special supplement to the ‘Echo’ magazine devoted to Polish literature and contemporary culture was published during the fair.