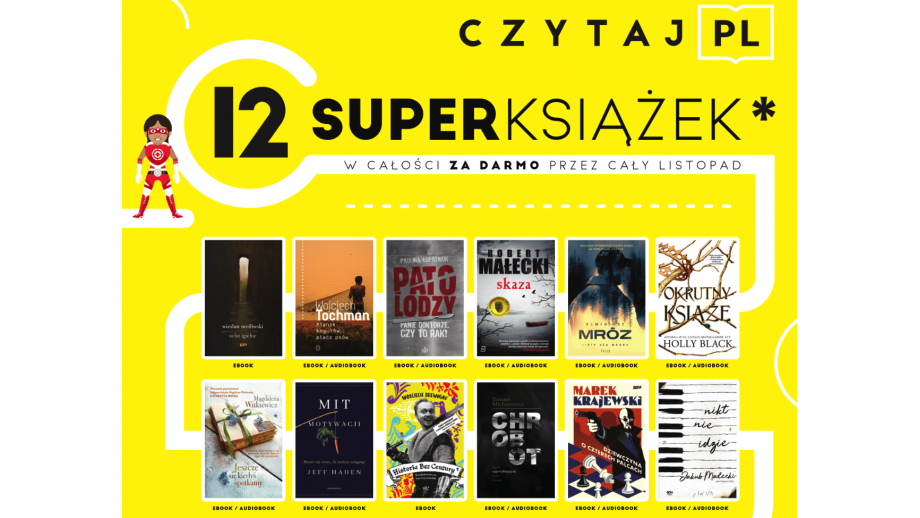 Over 130 thousand books – that’s the number of books downloaded by the participants of the Czytaj PL (Read PL) campaign, at the same time breaking the record of the previous edition by almost 50%. Poles read from Iceland to Antarctica - posters with QR codes could be found on 4 continents, in 14 countries, nearly 1000 towns and cities in Poland, and 28 places abroad. As many as 50 thousand people downloaded the application to borrow bestsellers for free. The most popular book turned out to be Skaza (“Flaw”) by Robert Małecki, followed by Listy zza grobu (“Letters from Beyond the Grace”) by Remigiusz Mróz. These books were joined on the podium by Jeff Haden's The Motivation Myth. This year's Read PL proves that Poles love reading, and the campaign, organised over the past five years, makes a lot of sense and has a real impact on the level of readership in our country. The strategic partner of the campaign was the Book Institute.

"Campaign Read PL proved to be record-breaking this year! We worked to improve all the elements of the campaign, we also strongly focused on improving the application, and effects of this work are visible. More schools, more borrowings, more reach, more readers involved in promotion, and a highly rated application. We are very happy with this result, and, since it was the fifth birthday edition of the campaign, we are also planning a surprise. Stay with us!," announced Paweł Polański, director of the Woblink platform. These records include over 130,000 read books, 4 continents, 14 countries, nearly 1000 Polish towns and cities, 28 places abroad, and almost 5,000 invitations to participate in the action. The results of Read PL 2019 prove that November is the largest reading month of the year.

Read PL Campaign for the 5th time took off from Wawel Castle in order to reach the furthest corners of the world. We are glad that the pleasure of reading radiates from the Cracow UNESCO City of Literature, which is the heart of the campaign, not only in so many Polish towns and cities, but also promotes reading among Poles living abroad. Read PL has been a great adventure for our team for half a decade... fortunately, it's not the end of this year's surprises and reading adventures! Stay with us - super-powerful surprises await you!,” says Katarzyna Jakubowiak, coordinator of the campaign on behalf of the Cracow Festival Office.

Dariusz Jaworski, Director of the Book Institute, emphasises the huge participation of schools in this result. This is a great success, which, in the campaign Read PL and “Hunt Your Book”, was made possible, among other things, by the much greater interest of students, teachers, and librarians in secondary schools throughout the country. This shows that such action makes sense. I hope that next year will be even better.

The "Hunt for Your Book" campaign, initiated by the Book Institute, was attended by 1,400 students from secondary schools, who, with their T-shirts, made books available for free. For them, special competitions were also prepared, among others, for the best spot promoting reading, which, in a creative and original way, was to encourage young people to participate in the campaign and more often reach for various titles - in both electronic and paper form.

Additionally, this year's boost to the level of readership was helped by superheroes created by illustrator Jan Kallwejt. Heart-Man expanding the horizons, Third Eye-Man raising IQ, or Bulb-Man increasing creativity - each of the 12 books participating in the Read PL campaign was illustrated by a superhero who also reflects the influence of the given bestseller on the reader. Using their extraordinary powers, they all fought against the low level of reading in Poland and encouraged people to read. Superheroes could be found on posters with QR codes in 21 partner cities, as well as everywhere where the readers hung the campaign poster. Their support proved invaluable, as this year, as many as 35 thousand more books were read than in the previous edition of Read PL. Nearly 50,000 downloads of the Woblink app were also registered, which provided free publications. These results prove that despite the low level of readership in our country, as shown in research, Poles like to read - especially the latest literature, which in Read PL is easily accessible on smartphones.

Co-financed by the Minister of Culture and National Heritage.