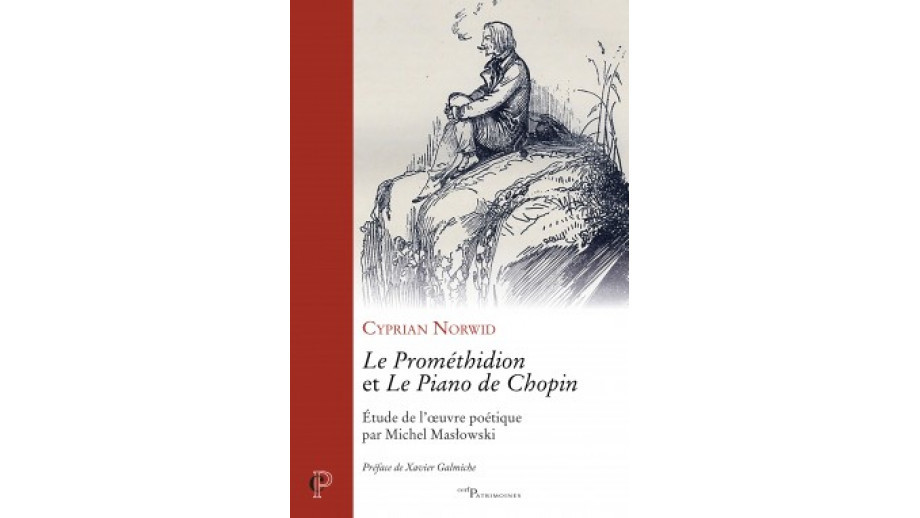 Michał Masłowski is a long-time professor of Polish literature, first at the University of Nancy and then at the Sorbonne in Paris. His book discusses Norwid's philosophy of work and culture as well as anthropology of culture, finding in them affinities with the thought of Emmanuel Levinas (1906-1995).

Prof. Maslowski is the founder of CERCLE, a centre for the study of European Cultures and Literature, of which he was the director. His scholarly works, as well as his translations of Polish poetry, contributed to the French understanding of the specificity of Central European culture.

In France, with few exceptions, Cyprian Kamil Norwid is virtually unknown. In an interview with PAP, Prof. Maslowski said that this is why he has undertaken a new, revised edition of the translations of Promethidion and Chopin's Piano. Joseph Pérard's translations were at one time published, but the print run was exhausted and there were no reissues.

Among the French admirers of the Polish poet are the writer André Gide and the philosopher Henri Bergson, who quoted Norwid in their works. Gide, says Professor Maslowski, "was fascinated by Chopin and Norwid's sensitivity to Chopin.”

"A Russian Nobel laureate, the poet Joseph Brodsky, who knew Polish and was friends with Czeslaw Milosz, said several times that he considered Norwid to be one of the greatest poets," recalls the professor.

Vladimir Holan was also enchanted by Norwid, as Xavier Galmiche, an expert in Czech literature and the author of the foreword to his book, pointed out to Professor Maslowski. "I would add that it was Holan's admiration that prompted Prof. Galmiche to offer me the initial text for his work on Norwid," reveals Prof. Maslowski.

Answering the question whether one can say "Norwid our contemporary,", as Jan Kott once did about Shakespeare, the professor has not the slightest doubt, "One can and it has been said many a time.”

Mieczysław Inglot, who passed away two years ago, collected accounts of Norwid and his works in a book. "And many of them confirm Norwid's enduring relevance, that he is, in fact, the only poet still relevant," explains Prof. Maslowski.

"For me," he elaborates, "this contemporaneity is based on the fact that Norwid gave rise to the idea of solidarity as a cultural bond, ideas that were directly developed by Józef Tischner and Karol Wojtyła. One of St. John Paul II's best, most important encyclicals, Laborem exercens is clearly inspired by Promethidion." John Paul II's entire theory of work is based precisely on Norwid, which testifies to an incredibly modern understanding of spirituality - not just religion, but spirituality."

Masłowski emphasises that "Norwid's concept of patriotism, of Polishness, was opposed to all nationalism. He saw it in a universal perspective. He departed from what could be called ‘parochial Polish’. And at the same time, he had an extraordinary sense of irony and detachment".

Finally, Professor Masłowski points out that while valuing the philosopher highly, one should not forget about the artist. "Norwid has many interesting thoughts, but he is, above all, a great poet. Difficult, it is true, but great. People carry some of his works with them, take notes, remember."