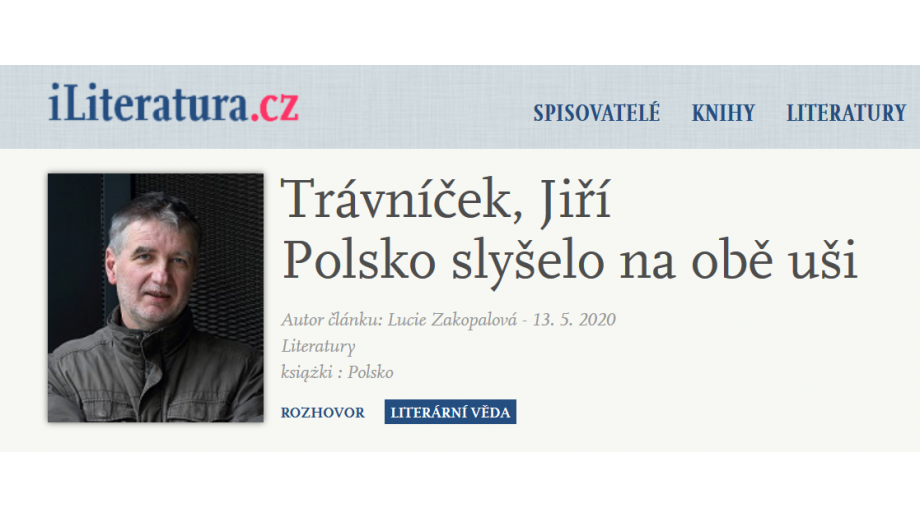 Poland's participation as an honorary guest of the International Book Fair and the ‘Svět Knihy’ Literary Festival in May 2020 was to be the biggest opportunity for a multifaceted promotion of Poland in the Czech Republic in a decade.

These plans were thwarted by the coronavirus epidemic.

The organisers of the Polish presentation - the Book Institute and the Polish Institute in Prague - flexibly responded to the current situation by implementing a series of projects adapted in form to the constraints associated with the epidemic.

We have already written about Polish thematic issues of the magazines "Dějiny a současnost" and "A2". We have also published videos with the participation of Czech writers Jáchym Topol and Petr Borkovec, who speak of their fascination with Polish literature (the next interview in this series will be presented tomorrow). This time, we would like to present a project implemented by the iliteratura.cz portal, where you can find a series of interviews (including the literary historian Prof. Jiří Trávníček and illustrator Piotr Socha) as well as reviews of novels by Martyna Bunda, Weronika Gogola, Piotr Paziński, and other Polish authors, recently published in Czech.

Professor Trávníček says that such writers as Gombrowicz or Herbert are missing among Nobel Prize winners, he reflects on the role of Central Europe in the history of culture in the Old Continent, refers to the issue of mutual perception of Poles and Czechs, mythologisation and demythologisation, and compares readership in Poland and the Czech Republic.

The whole Polish thematic section on iliteratura.cz can be found at the following address: