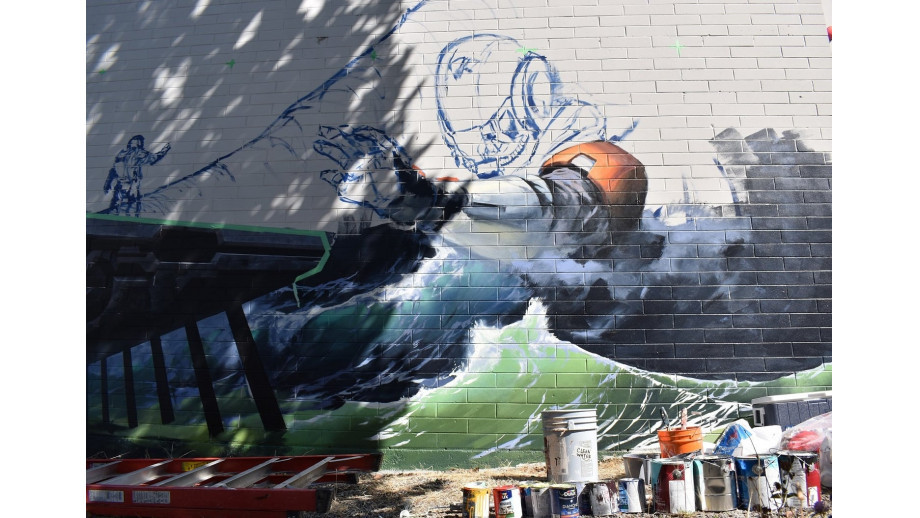 In Vancouver, work on a mural devoted to Stanisław Lem is nearing completion, and in Toronto preparations are underway for a book picnic and a "Night at the Library". At the turn of summer into autumn, Polish literature is brought closer to Canadians and the Canadian Polish community.

In connection with the centenary of Stanislaw Lem's birthday, the Consulate General of the Republic of Poland proposed a mural to the city of Vancouver.

"This is a good way to enter the public space with art, street art is a modern and effective form of reaching out to residents. After contacting the curators of the Vancouver Mural Festival, who provided a list of artists, we chose one of them - it's Ukrainian-born, Vancouver Academy of Fine Arts graduate Dimitri Sirenko. "He has read Lem, he knows Solaris - Lem's novel that is probably best known in North America - and he has skilfully woven into the picture references to Poland inspired by that novel, Lem's own roots and, at the same time, to Canada's aboriginal culture, " Polish Consul General in Vancouver Andrzej Mańkowski told Polish Press Agency (PAP).

Sirenko entitled his work 'Reflection', referring to the ocean from Lem's novel. The Polish touch is the Polish flag on a crew member's suit, the Lion constellation is a reference to Lviv, the writer's birthplace, and the menorah, showed as part of the construction of the space shuttle's platform, alludes to the writer’s Jewish origin. In turn, the raven and the salmon, important in the culture of the West Coast Indians of Canada, remind us of the myth of the creation of the earth and traditional food. "When major events begin in Vancouver, we are reminded that they are taking place in the traditional territories of the (Indian) Musqueam, Squamish, and Tsleil-Waututh. The artist has chosen a visual form to remind us of history," added Mankowski.

The mural also had its scientific consultant, Canadian writer, literary scholar, and expert on Lem's work - Peter Swirski, who, in his commentary on the work intended for a Canadian audience, recalled the multi-layered nature of Lem's work, emphasising that "the transatlantic consensus is that Lem-like creators of tales appear on Earth no more often than the return of Halley's comet".

Work on the mural is nearing completion, and it will be officially unveiled to Vancouver residents for the first time on Tuesday. Those interested will be able to watch the finale of Sirenka's work.

"It's not at all easy to find a wall in Vancouver on which a mural can be painted. We have a very good venue, on 5th East Avenue, where the annual mural festival will be taking place next year. Mount Pleasant, the neighbourhood where the mural is being created, is home to many start-ups, technology companies, game companies, a great place to refer to the futuristic part in Lem's work. "»I have seen the future« is the slogan for the celebrations of the 100th anniversary of the writer's birth," the consul stressed.

A book picnic in the Consulate's garden and a "Night at the Library", both organised by the Polish Consulate, will also make reference to Lem.

"During the book picnic in September, participants will read Moralność pani Dulskiej (“The Morality of Mrs. Dulska “) by Gabriela Zapolska, which is this year's choice for the annual National Reading Day, initiated by the Presidential couple, which takes place a week later in Canada than in Poland because of the long weekend. Maybe even Polish teachers will perform part of the play? These are the initial plans. Further on, there are also readings addressed to children, and Lem's Bajki robotów (“Fables for Robots") is one of the options," Jolanta Grzelczyk, coordinating the organisation of the picnic from the consulate's side, told PAP.

Enrolment of families is now underway, facilitated by the reduced restrictions associated with the pandemic. In addition to the National Reading Day, the picnic programme will also include competitions and games for children, as well as a photo exhibition to mark Children's Day. Fables for Robots, in a new edition from Wydawnictwo Literackie, will be one of the prizes in competitions for children.

"A Night at the Library", a late-night reading event for children once again organised by the Toronto Consulate, will also be devoted to Lem. "Here, Lem will be the leading theme. Among the gifts for children, there will be not only books, but also T-shirts with a quote from Kongres futurologiczny ("The Futurological Congress") - "A dream will always triumph over reality, once it is given the chance," added Grzelczyk.