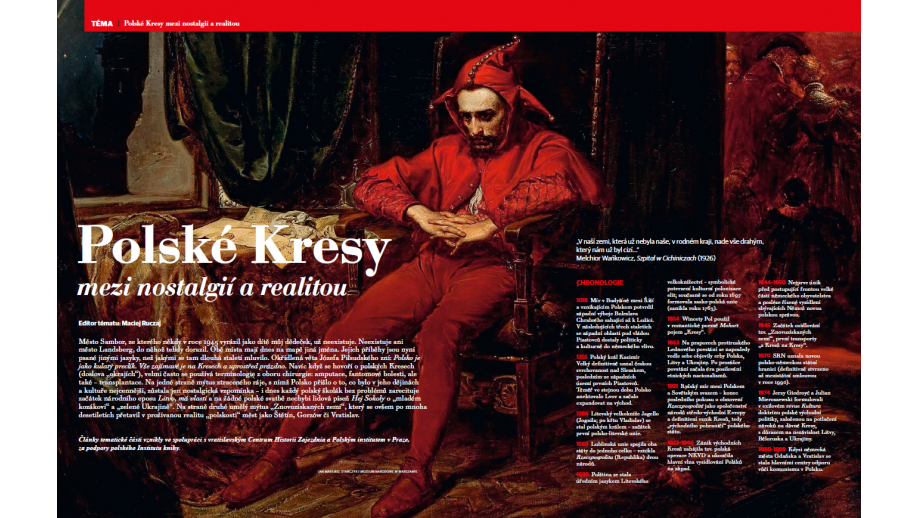 Polish Borderlands in the Czech monthly magazine "Dějiny a současnost"

Yesterday, a new issue of the Czech cultural and historical monthly "Dějiny a současnost" ("History and Modernity") was published, whose leading theme is "Polish Borderlands between Nostalgia and Reality". The issue was created with the support of the Book Institute, in cooperation with the Editorial Office of the “Pamięć i Przyszłość” ("Memory and Future") Centre, and the Polish Institute in Prague.

The theme of the issue is historical and cultural reflection on the meaning of the myth of the Borderlands in Polish culture and society. This concerns both the lost Eastern Borderlands, about which Przemysław Żurawski vel Grajewski writes in his essay, but also the new Borderlands, i.e. Western Lands. Katarzyna Uczkiewicz, the editor of the quarterly Memory and Future writes about the place of the Western Lands in the Polish imagination. Prof. Aleksander Srebrakowski describes the ‘transfer’ of the Kresowians (inhabitants of the Borderlands) ‘from Borderlands to Borderlands’ as a result of World War II. In Marcin Łapczyński's text, in turn, we will learn how the legacy of The Polish–Lithuanian Commonwealth is reborn in the consciousness of today's Lithuanians, Belarusians, and Ukrainians. The last text is devoted to literature: the Prague-based Polish philologist Michala Benešová describes the work of Marek Krajewski suspended between pre-war Breslau and Lviv - two cities that no longer exist.

"Dějiny a současnost" is a magazine published since 1959. In 1969, after the Warsaw Pact troops invaded Czechoslovakia, since it was too independent, it disappeared from the public space for over 20 years. It returned in 1990, on a wave of democratic change after the Velvet Revolution. This magazine popularises history. The authors of the articles include researchers, academic teachers, PhD students and students of historical disciplines, archivists, museologist, and art historians.