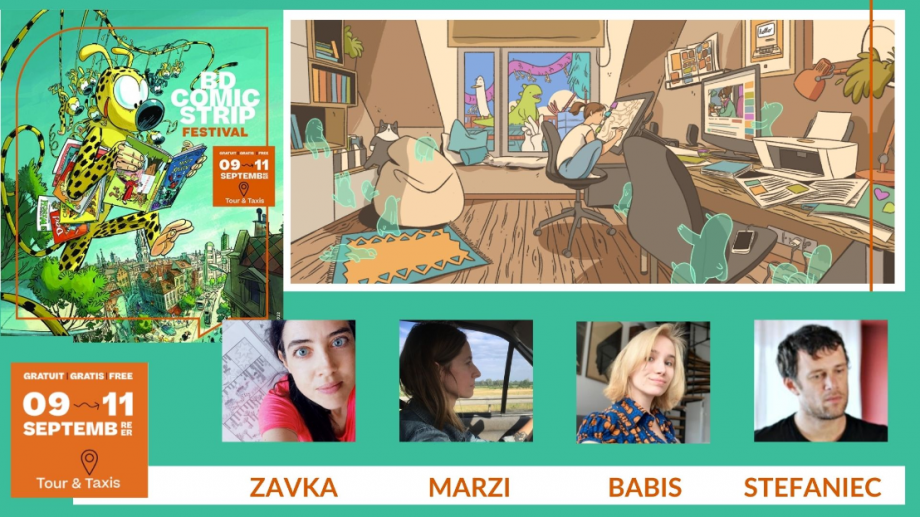 Polish and Ukrainian comics at international comics festival in Brussels

On 9-11 September, the International Comics Festival “La Fête de la BD” in Brussels will host an exhibition on Polish and Ukrainian comics. The following Polish authors will be present at the festival: Katarzyna 'Zavka' Zawadka, Katarzyna Babis, Marzena Sowa 'Marzi', and Wojciech Stefaniec. The initiative of the Polish Institute in Brussels was supported by the Book Institute.

At the initiative of the Polish Institute in Brussels, in cooperation with the BWA Gallery in Jelenia Góra, the Polish Comics Association, and the Book Institute, under the honorary patronage of the magazine "Zeszyty Komiksowe", two cross-sectional exhibitions will be presented at the most important comics festival in Belgium. The first exhibition will showcase Polish comics, with a particular emphasis on comics created by women. Ukrainian elements were not to be missed this year; hence, the second exhibition will present renowned Ukrainian artists whose works refer to the situation in Ukraine. Both exhibitions will be displayed in the International Pavilion.

Among the invited authors, there will be Katarzyna Zawadka 'Zavka', Katarzyna Babis, Marzena Sowa 'Marzi', Wojciech Stefaniec, and Yulia Vus, who will come to the festival from Lviv. The authors will meet with the youngest audience, for whom there will be workshops on illustration and comic drawing led by Katarzyna Zawadka "Zavka" and Katarzyna Babis, as well as a workshop entitled "How to create your own hero?" led by the renowned and very popular in Belgium Marzena Sowa "Marzi". Yulia Vus from Lviv will lead a workshop on how to sketch easily entitled "What is a sketch?".

During panel discussions, curators and invited artists will talk about how the comics market is currently developing in Poland and Ukraine. Special attention will of course be given to the artists present at the festival. A Polish stand will also be available, where invited artists will be signing boards and books; the extensive publishing offer will also include Timof Comics with Pawel Timofiejuk, who will be present at the festival, and will showcase newly released albums along with classics.

Comics created by women in Poland are currently experiencing their best period. A growing number of female creators, major industry awards both in Poland and abroad for women - this is what the last decade has been like for Polish comics, which for decades was a male domain. The Polish exhibition will feature the work of thirty Polish cartoonists, selected contemporary artists, and several artists working during the communist period and before the Second World War.

Meanwhile, in Ukraine, where comics began to develop after the collapse of the USSR in 1991, female cartoonists are now on the rise. Following the Russian invasion in Ukraine, in February this year, many illustrators left the country or joined the defence effort. There is now a growing phenomenon of short documentary comics in Ukraine, created by artists in the combat zone and published on Instagram. Ukrainian comics are worth presenting not only for political and social reasons, but also because of their high artistic level. The Ukrainian exhibition will feature a cross-section of contemporary Ukrainian comics creators who work for publishers such as UA Comix, Vydavnytstvo, Vovkulaka, Lantsuta Publishing, Lyuta Sprava, The Will Production.

The first edition of “La Fête de la BD” festival and fair took place in 2010. More than 100,000 participants attend the event every year. This year, again, you will be able to find your favourite comic book heroes and authors, attend workshops, meetings, screenings, book signings, and many other events for all ages. The festival is just one proof of the strength of comics in Belgium. With more than 700 comics authors, Belgium is the country with the highest 'density' of comics creators and illustrators in the world, and comics are an integral part of Belgian culture. To honour the revered comic characters and their impact on culture, a comics museum was opened in Brussels in 1989, there are also murals dedicated to them created regularly throughout the country, and comic characters even appear on Belgian passports.

At the stand: Live drawing, dedications, and autographs

16:00 - Workshop for children by Kasia Babis & Zavki "Create your own comic book, step by step" (English)

At the stand: Live drawing, dedications, and autographs

Authors present at the festival:

Zavka is an illustrator and author of comics, graduate of the Academy of Fine Arts in Warsaw. Associated with the alternative art scene and comics outside the mainstream. Her style is a mixture of dreams, beauty, and madness. Key publications: comic books – Hungry Hansel and Gluttonous Gretel and Jazda stąd, illustrated fairy tale - The Serpent. She works mainly on paper using traditional methods of painting with paints, drawing with pencil and ink.

Katarzyna Babis is an illustrator, writer, and comic book author living in Warsaw. She made her debut in 2015 with the picturebook Maia of The Moon, which was nominated for the Warsaw Literary Award in 2016. A year later, she published her second book, The Elephant in The Room. Since then, she has been specialising in creating short comics and political cartoons ('The Nib', 'In These Times', 'The New Yorker'). Her works were featured in the comics anthology Guantanamo Voices, published by Abrams ComicArts, which was selected for the Best Graphic Novels of 2020 list by the New York Times.

Marzena Sowa is a Polish comics scriptwriter living in France. She is the author of the autobiographical comics Marzi: a memoir about her childhood in Poland in the 1980s, told from the perspective of a little girl. Marzi has been published in France and Belgium and translated into English, Spanish, Italian, German, Korean, and Chinese. Marzena also creates comics for children - she has published That Night, a Monster… together with Berenika Kolomycka and Histoire de poireaux, de vélos, d'amour et d'autres phénomènes together with Aude Soleilhac. In 2017, she started studying at a film school, and in 2019 she created her first short documentary 'Un essai sur nous deux' about her mother.

Yulia Vus is an illustrator and cartoonist from Lviv, Ukraine. Her work includes commercial, book and editorial illustration as well as cover design, poster design, lettering, and animation. Yulia has participated in numerous exhibitions in Ukraine and internationally and is one of the creators of the "Shozasketch" drawing community for people of all ages who love to draw. She finds inspiration in moments, situations, and people straight out of everyday life, of which there are always plenty enough to illustrate. The main characters in her comics are usually her adopted cat Phoebe, her boyfriend Ivan, or Yulia herself.

Wojciech Stefaniec is a graphic artist, poster designer, painter, author of book and music album covers, cartoonist. He was the recipient of the Polish Comics Association's awards for Best Cartoonist of the Year in 2011, 2015, and 2019. He won awards for best comic book in 2013 and 2015 for Noir (script by Łukasz Bogacz) and Wróć do mnie, jeszcze raz (“Come Back to Me Again”, script by Sztybor). He regularly publishes in fanzines and magazines dedicated to the art of comics, such as 'Ziniol', 'Biceps' and 'B5'.