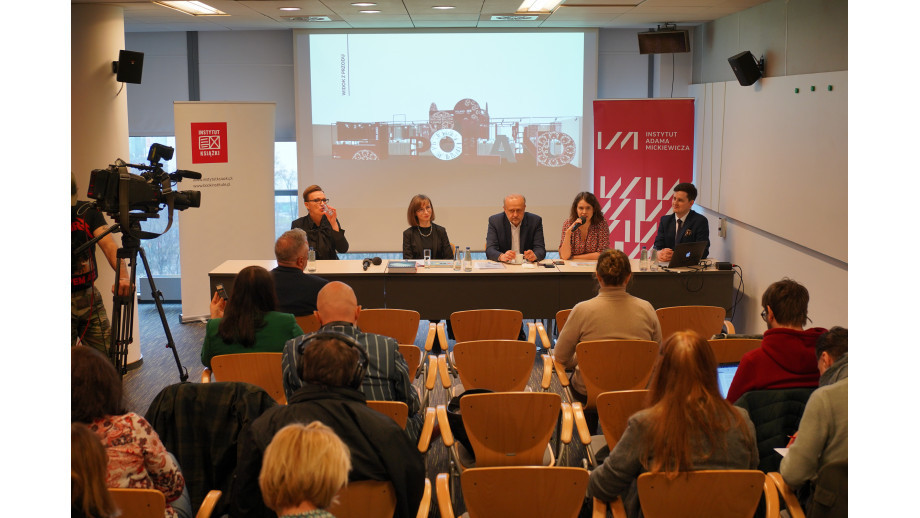 From 31 January to 5 February 2023, Poland will attend the TIBE Taipei International Book Exhibition as a guest of honour. The International Book Exhibition in Taipei is one of the most important events of its kind in the Far East and, at the same time, part of the Book Institute's consistently pursued mission to promote Polish literature abroad, including in places where it has so far remained underrepresented. A press conference was held in Warsaw to introduce the Polish exhibition. It was attended by Dariusz Jaworski, director of the Book Institute, Barbara Schabowska, director of the Adam Mickiewicz Institute, Agnieszka Urbanowska, head of the Book Institute's foreign department, and the designer of the Polish stand, Dr Anna Skołożyńska-Cieciera of ASC Studio.

In recent years, Polish literature has triumphed around the world, as evidenced for example by the Nobel Prize for Literature awarded to Olga Tokarczuk, the numerous prizes for our children's literature at the prestigious Bologna International Book Fair, or the nominations for important international awards for Polish prose and poetry; nevertheless, we are still trying to make it reach as many places in the world as possible. Hence the plan, which has been consistently prepared for several years, to be present at the International Book Exhibition in Taipei, where the Book Institute, with the support of the Polish Office in Taipei and the Adam Mickiewicz Institute, is the main organiser of the Polish display.

The Taipei International Book Exhibition is a fair we have not attended before, and now, we are going there as a guest of honour. We did not participate for various reasons, including political ones, as a state institution we have to comply with the government's agenda. The pandemic thwarted our plans. Last year, we organised the World Congress of Polish Literature Translators; a ten-day quarantine was still in force in Taiwan at the time. So, we are going now, we can rise to the challenge,” said Director Jaworski.

The Taiwanese fair will be an opportunity to showcase the best of Polish literature and illustration to readers and publishers there, as well as to publishers from East Asia (including South Korea and Japan). Particular emphasis will be placed on books that are about to be published or have been published in recent years in traditional Chinese translation and in English - novels, short story collections, essays, reportage, poetry, and literature for children and young adults.

The highlight of the Polish presentation will be live meetings with representatives of Polish authors from various fields of literature. In addition to meetings with authors, we have also prepared illustration workshops, panel discussions with foreign authors (Taiwanese and those from other countries), as well as press conferences.

“For several years now, the role of guest of honour has not just been treated as an event, but it is preceded by a three-year plan. The first year is all about preparations, the culmination of the second year is the fair, but we try to organise events - not only literary ones - throughout the year, and the third year is a continuation of these activities. Of course, our work does not stop there. We are very keen to have a lasting presence in the Asian market. We are also currently planning to expand into Spanish-speaking markets. In Taiwan, we have the largest exhibition area to date, over 440 square metres. Such a fair is not only about books, but also about the promotion of the entire Polish culture abroad, “ added the Director of the Book Institute.

The Polish presentation will take place primarily within a pavilion of more than 400 square metres, designed by Dr Anna Skołożyńska-Cieciera of ASC Studio, and referring to Polish traditional folk designs in an unusual way. There will be a book exhibition, an information desk, a stage for meetings with authors, a reading zone, themed zones (children's, heritage, comics, gaming, cooking), as well as a business zone for publishers. Polish publishers, literary agents, and cultural institutions will be exhibiting at our stand, including the National Library, the State Publishing Institute (PIW), Powergraph, Foksal, Andrew Nurnberg Associates, Manuscriptum, Dwa Siostry, Nasza Księgarnia, and KaBooks.

It is worth emphasising that by being present as guest of honour, Poland has a special opportunity to draw attention not only to our literature, but also to our culture. While Taiwanese, and more broadly Far Eastern, readers already have access to Polish books, there are still significant gaps to be filled. Visitors will be able to explore not only new books, but also two exhibitions focusing on Polish history and children's illustration. To date, authors such as Janusz Korczak (thanks to translations by our country's great promoter Wei-Yun Lin-Górecka), Wisława Szymborska, and Andrzej Sapkowski have become very popular in Taiwan. More and more children's literature is also being published there, including books by Aleksandra and Daniel Mizieliński, Michał Rusinek, Piotr Socha and Wojciech Grajkowski, as well as, Iwona Chmielewska, who is very popular in East Asia. Polish non-fiction literature, especially books by Witold Szabłowski, is also gaining an increasing audience. Being present as guest of honour in Taipei is an opportunity to promote Polish artists even further.

The details of the Polish programme were presented by Agnieszka Urbanowska. Cyryl Kozaczewski, director of the Polish Office in Taipei, joined the conference online. A promotional spot introducing the Polish presentation was also presented.

We wish to present our country's culture at its best to an Asian audience, to make Polish literature interesting to Taiwanese readers and professional audiences, and to build an image of Polish literature as high quality and accessible. Visitors to the Polish pavilion will be able to enjoy an exhibition devoted to Polish children's illustration - "Captains of Illustration", organised by the Adam Mickiewicz Institute and curated by Jacek Friedrich, as well as concerts by the Polish-Ukrainian band Dagadana, which has been combining elements of Polish and Ukrainian culture through jazz, electronica, and world music for over 14 years.

The International Book Exhibition in Taipei is part of the strategy pursued by the Book Institute, the aim of which is to have a sustained, distinct presence of Polish literature in places where up to now Polish books have not been available or have been insufficiently available.

Next: 30 lat temu zmarł Józef Czapski Back to list