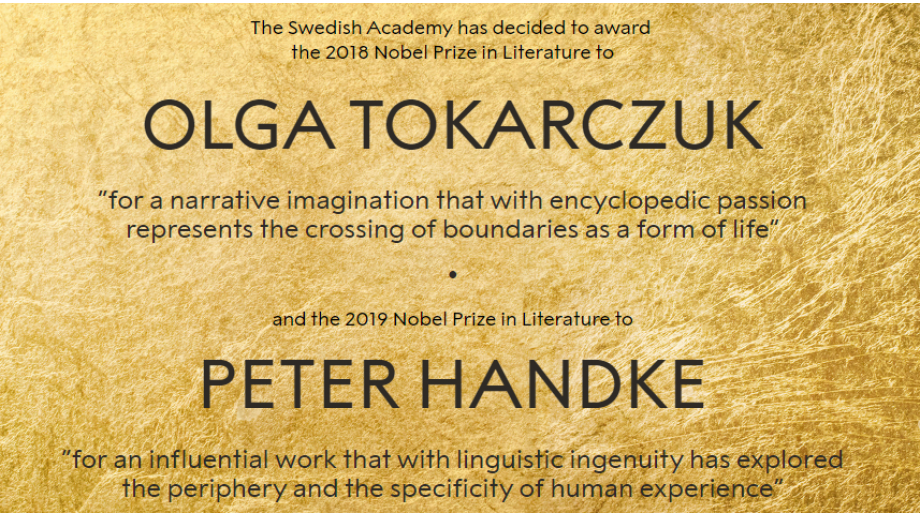 We now know the 115th and 116th Nobel Prize Laureates in Literature. The Swedish Academy decided to honour Olga Tokarczuk and the Austrian Peter Handke. Tokarczuk received the award for 2018 and Handke for 2019. The Academy decided to award Olga Tokarczuk for “narrative imagination that with encyclopaedic passion represents the crossing of boundaries as a form of life”. Peter Handke was awarded for “an influential work that with linguistic ingenuity has explored the periphery and the specificity of human experience”. The ©Poland Translation Programme, conducted since 2004 by the Book Institute, has supported 91 translations of the Polish Nobel Prize winner into 28 foreign languages over the last two decades, including five into English and seven into Swedish.

The fifth Polish Nobel Prize winner in literature, Olga Tokarczuk, was born on 29 January 1962 in Sulechów and studied psychology at the University of Warsaw. After graduation, she worked as a maid in a London hotel and as a psychotherapist in Wrocław and Wałbrzych. In 2018, when she received the Booker Prize in London, she emphasised that the earrings she was wearing were from the time when she was working as a maid.

When her first literary works gained popularity, she gave up her job and after moving to Nowa Ruda, she devoted herself to writing. He currently lives in Wrocław, as well as in Krajanów near Nowa Ruda, in the Central Sudetes. The landscape and culture of this area is reflected in several of her works. She is the author of 17 books - novels, collections of short stories, essays, and film scripts. Her work has been repeatedly transferred to theatres and film screens. She is one of the most award-winning contemporary Polish writers - she has received, inter alia, the Kościelski Foundation Award, twice - in 2007 and 2015 - the Nike Literary Award, and in 2018, she was honoured with the International Booker Award.

Olga Tokarczuk is a rare case of a writer appreciated by both critics and her audience. She debuted in 1979 with short stories in "Na Przełaj" magazine. In 1989, her poetry volume was published, and in 1993, her first novel, Podróż ludzi Księgi (“The Journey of the Book-People”), appeared. The book, before it was published by Przedświt publishing house, was rejected by many well-known and prestigious publishers who must have belatedly regretted their scepticism, for they themselves awarded the book with the Polish Book Society Award. It is a story about a failed quest for a mysterious Book, during which great love flows down onto the two main characters. The fascination with esotericism is also revealed by another book by Tokarczuk - the novel "E.E." (1995). This time, the action was set in Wrocław in the early 20th century, and the main character is Erna Eltzner, an adolescent girl from a Polish-German bourgeois family, of whom psychic talents were discovered.

Her third novel, Prawiek i inne czasy (“Primeval and Other Times”, 1996), was a great success for the writer. The eponymous Primeval, a mythical village supposedly located in the middle of Poland, is a microcosm in which the laws governing the universe can be observed on a smaller scale. And Dom dzienny, dom nocny ("House of Day, House of Night", 1998) is Tokarczuk's most personal book, set in the Kłodzko Valley, where she lives.

The book Bieguni (“Flights”) from 2007 was nominated for the ANGELUS Central European Literary Award and won the Nike Award (2008). This is a study of travel psychology. According to the author, tourism has become a modern way of satisfying a very old, atavistic, nomadic drive. The title of the book, Bieguni (“Flights”) refers to the name of an eighteenth-century Russian sect, whose members believed that the world is the work of Satan, and when we stop, Satan has the easiest access to us. In order to escape from the devil, we have to move all the time. The author describes the world of contemporary bieguni, permanent travellers who keep their products in small packages, like travel-size cosmetics, folding toothbrushes, disposable slippers, their own diseases, associated with changes in time, their own language: simple, functionalised English. There is even a separate branch of psychology which describes them - travel psychology. In 2008, Flights won the Nike Literary Award, and a decade later, in 2018, the book Flights (translated by Jennifer Croft), received the International Booker Award.

After Flights, Tokarczuk published a book which she herself describes as a "moral thriller". The main character of Prowadź swój pług przez kości umarłych ("Drive Your Plow Over the Bones of the Dead") is Janina Duszejko - once a bridge engineer, today - a rural teacher of English and geography and a caretaker of summer houses. Her passion is astrology, and her great love is all animals. In the area where Janina lives, poachers and animal abusers start to die. The number of deaths is growing. Janina has a theory about the motive and perpetrator of these crimes, but the police ignore her, treating her as a harmless oddball

"I find that the book is still relevant and very vividly received," Tokarczuk told the Polish Press Agency (PAP) in May, after the English translation of the novel was nominated for the Booker Prize. "The staffage of the crime novel and black humour includes a question about more serious things. If the applicable law is immoral, how should an honest citizen behave in such a situation? Do they go as far as protest, contestation, and rebellion? To what extent is rebellion a part of democracy? Should a man follow his conscience against the state? It is also a story about excluded people who are ignored by the authorities, about patriarchal society, and about what power structures based on white, confident men who fill parliaments look like. It is also a book about loneliness and the exclusion of elderly women.” In 2017, Agnieszka Holland transferred the novel to the silver screen. The film Pokot ("Spoor”) had its premiere at the German Berlinale and was awarded the Silver Bear and the Alfred Bauer Prize.

In 2014, Księgi Jakubowe ("The Books of Jacob"), an epic story about Jakub Frank, a Jewish messiah living in the 17th century on the eastern frontiers of the Republic of Poland, was published. The protagonist is a character full of contradictions - an inspired Jewish mystic who worshipped Our Lady, a skilful fraud, but also a talented politician, a man who led a large group of Polish Jews to be baptised in 1759. In 2015, the author received the Nike Literary Award for The Books of Jacob (for the second time, after Flights).

Among Tokarczuk's books, there are also collections of short stories:  Gra na wielu bębenkach (“Playing on Many Drums”, 2001), Ostatnie historie (“The Last Stories”), an essay about the novel by Bolesław Prus Lalka i perła ("The Doll and the Pearl", 2000), the book Anna w grobowcach świata ("Anna in the Tombs of the World", 2006) was created as part of the international series "Myths", as well as the collection of essays Moment niedźwiedzia ("The Moment of the Bear"). Tokarczuk's last book is Opowiadania bizarne ("Bizarre Stories") from 2018.

The second winner, Peter Handke, was born on 6 December 1942 in Austria. A lawyer by education, he is a playwright, novelist, poet, literary theoretician, and publicist.

According to the Encyclopaedia of Polish Theatre, Handke was one of the most popular representatives of post-war Austrian avant-garde. In the early 1960s, he joined the avant-garde literary group "Forum Stadtpark". As a young, rebellious writer, he debuted under the auspices of the poet Alfred Kolleritsch, creator of the experimental scene in Graz and publisher of the “Manuscript” magazine.

Handke is also the author of radio plays and film scripts. He collaborates mainly with Wim Wenders. Together they created, among other things: The Wrong Move, a loose adaptation of Goethe's Wilhelm Meister's Apprenticeship, which they placed in contemporary Germany, Die Angst des Tormanns beim Elfmeter and The Angst des Tormanns beim Elfmeter (1972), as well as Wings of Desire (1987). He himself directed Die linkshandige Frau (1977) and L'absence (1992).

The Swedish Academy was founded in 1786 by King Gustav III. Modelled after the Académie française, it has 18 members. The Academy is composed of writers, poets, philologists, and linguists. Its statutory task is to develop a large Swedish dictionary, the completion of which is planned for 2020. The academics also organise conferences, award prizes and scholarships, and publish monographs of Swedish writers.

Candidates for the Nobel Prize for Literature are nominated by previous winners, members of similar academies in other countries, professors of literature and history of literature from academic institutions, presidents of writers' associations, PEN-clubs from all over the world, as well as members of the Swedish Academy themselves.

Candidates may be nominated until the end of January. There are usually about 500 of them, after the first selection there are 150-200 names left. In March, the list is narrowed down to 10-20 names, and before the summer holidays, it includes a maximum of 5-8 proposals. In September, only two candidates are usually considered. The vote shall take place as follows: The Secretary of the Academy goes around the table with a silver tray and the academics place cards with the name of their choice on it. There is an absolute majority of votes - if the first time the vote is not successful, the vote is held again.