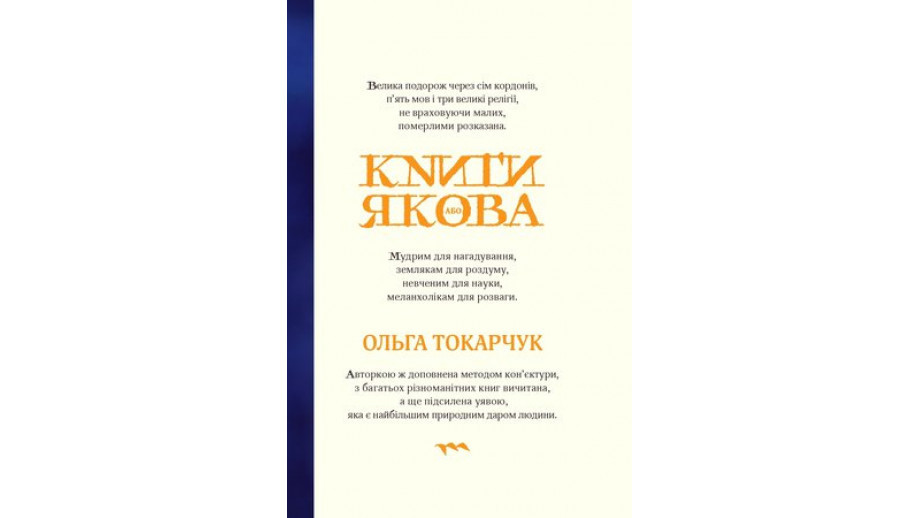 „Księgi Jakubowe” in Ukrainian with the support of the Book Institute

In Ukraine, Olga Tokarczuk’s Księgi Jakubowe (“The Books of Jacob”) translated by Ostap Sływynski has been published. The publication was supported by the Book Institute as part of the ©POLAND Translation Programme.

Knigi Jakuba, which is the title of the Ukrainian edition, was published by the Tempora publishing house in Kiev.

The Books of Jacob is one of the most renowned Polish novels of this decade. The book outlines the fate of the Polish-Lithuanian Commonwealth at its end, focusing on the figure of the charismatic Jew Jakub Lejbowicz Frank. When a mysterious outsider from Smyrna begins to proclaim ideas that quickly divide the Jewish community, Frank rapidly gathers a circle of dedicated students around him and tries to change the course of history.

In The Books of Jacob, distinguished with numerous awards, Olga Tokarczuk draws fully upon the tradition of the historical novel. She meticulously depicts the realities of the era, architecture, clothing, and fragrances. We visit the courts of nobility, Catholic presbyteries, and Jewish households, praying and immersed in the reading of mysterious scriptures. Before the readers’ very eyes, the writer weaves a picture of bygone Poland, in which Christianity, Judaism, as well as Islam existed side by side.

The Books of Jacob is not only a novel about the past, but also a postmodernist historiosophic novel. For it can be read as a reflective, sometimes mystical work about the story itself and its meanderings and modes that determine the fate of entire nations.

Ostap Sływynski, the translator of The Books into Ukrainian, has translated, among other things, poems by Tadeusz Różewicz, Jacek Podsiadło, and Marcin Świetlicki as well as Andrzej Stasiuk's prose (his translation of Jadąc do Babadag [“On the Road to Babadag”] was awarded with the Award of the Polish Embassy in Ukraine for the best translation of 2007).