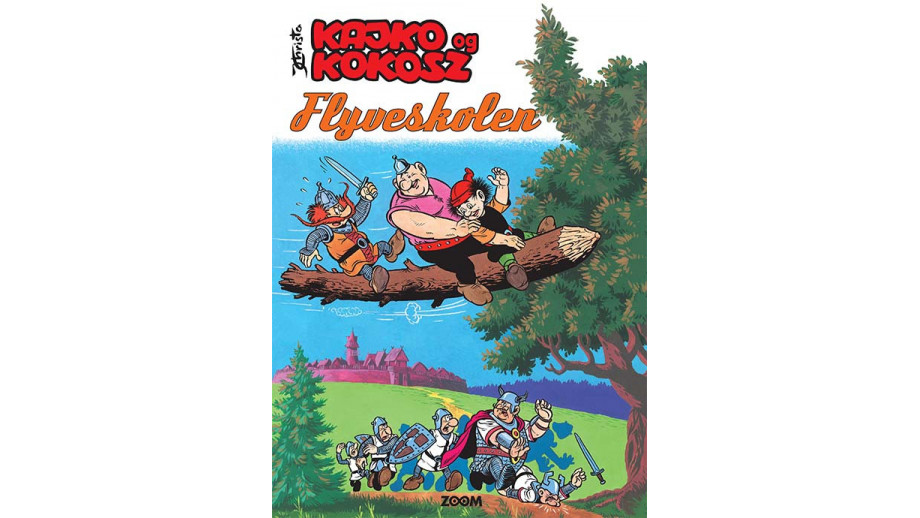 In Denmark, Janusz Christa’s comic book Kajko i Kokosz. Szkoła latania (“Kayko and Kokosh. Flying School”) has been recently published. The book was translated by Rune Brandt Larsen. The publication was supported by the Book Institute as part of the ©POLAND Translation Programme.

The comic book Kajko og Kokosz: Flyveskolen, as reads the title of the Danish translation, has been published by the Zoom publishing house in Copenhagen.

Near Mirmiłowo, the Kanveknights, unworthy of the name knight, built their own fortress. Their leader, Cruel Hegemon, was most angry when he heard that he had no sense of humour. One day, he decided to conquer the castle of the governor Mirmil and to start the attack by taking control of the brewpub, in order to quickly break the spirit of the defenders. Thanks to Kayko and Kokosh, the assault is repulsed, so Hegemon comes up with a way to get rid of both warriors from the castle. He persuades the governor to make his biggest dream come true and, together with his fellow castellans, to go to Bald Mountain in the country of Omsk, where witches will teach him how to fly.

It is worth mentioning that Kayko and Kokosh will be the first Polish original animated series on the Netflix platform. Its premiere is scheduled for 2021.

Last year, as part of the ©POLAND Translation Programme, the Danish edition of Sapkowski's Krew elfów (“Blood of Elves”) by Rune Brandt Larsen was published.