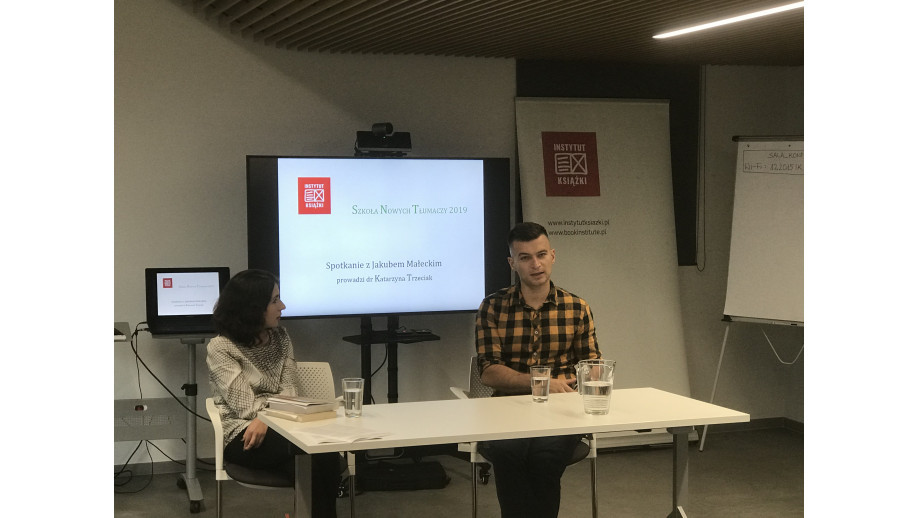 Jakub Małecki: "Translations are a dream come true". The workshops of the School of New Translators in Cracow have begun

Yesterday, at the Book Institute in Cracow, the second stage of the "School of New Translators" project has begun. The project is aimed at translators of Polish literature into foreign languages. Four of the best translators selected during the first stage of the translation workshop held in cooperation with the Polish Institute in Tel Aviv are taking part in it. The inauguration was accompanied by a meeting with Jakub Małecki and a workshop led by Dr Katarzyna Trzeciak.

"Never in my life did I expect to write books. I still can't believe it; all the time, I think that my mother will wake me up soon, because I'm going to school - started Jakub Małecki. - These translations are a dream come true. I may be naïve, but I think that when a foreign publisher wants to publish a book, it is mainly the factual factors, the quality of literature, that play a role. In the world of film, it's not like that. Besides, it seems completely incredible that in January, in the Netherlands, someone will be reading about a village in Poland.”

As Katarzyna Trzeciak noted, Jakub Małecki was installed into the trend of new rusticity and magical realism, which says a lot about the audience, in terms of their expectations and what they are looking for. Therefore, it is difficult to predict the reception of his work abroad.

"I have always imagined my book as a cottage in the countryside, next to which a great battle of two armies is taking place. Inside this cottage, an old couple sit at the table and talk. I have never been interested in a great story, although it must, of course, somehow penetrate through the window of this cottage" - said Małecki.