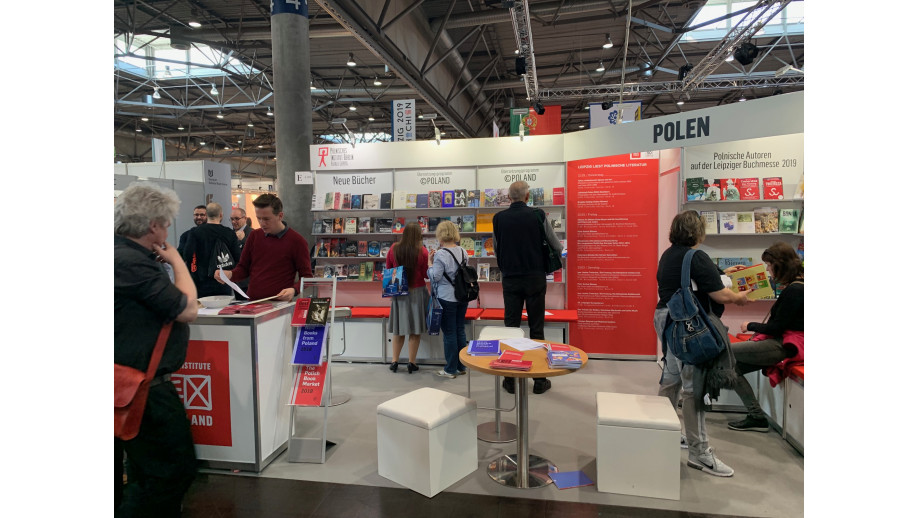 This weekend, Igor Janke and Katarzyna Bonda visited Leipziger Buchmesse, a meeting with Wojciech Kudyba and Tomasz Różycki took place, and Rüdiger Ritter talked about Stanisław Moniuszko's biography, which was published in Germany in February. The Polish stand at the Leipzig International Fair was organised by the Book Institute.

Igor Janke took part in a meeting related to the German edition of his book Twierdza (“The Fortress”) devoted to Fighting Solidarity. The author was accompanied by Roland Jahn, a legendary German oppositionist, currently federal commissioner of the Stasi Records Agency. The meeting took place as part of the popular and highly regarded "Leipzig Liest" festival. The programme of events devoted to Polish authors and topics, including author's evenings, presentations, and discussions, is the fruit of cooperation between the Book Institute, the Leipzig branch of the Polish Institute in Berlin, and other German partners.

Also this weekend, the Leipzig International Book Fair hosted one of the most popular Polish writers, the author of best-selling crime stories, Katarzyna Bonda. The meeting, co-organised by the Book Institute and the Polish Institute in Berlin, concerned the German translation of Okularnik ("Der Rat der Gerechten").

On Friday, a meeting was held on the German edition of the book Nasza wojna. Europa Środkowo-Wschodnia 1912-1916 („Our War. Central and Eastern Europe 1912-1916”) by Włodzimierz Borodziej and Maciej Górny. The event aroused interest due to, among others, the diverse perspectives on the historical events of the First World War in Poland and Germany.

A meeting with Piotr Socha was also very popular. The Polish author presented Drzewa (“The Book of Trees”), a subsequent bestseller after Pszczoły (“The Book of Bees”), which is a real triumph in the international arena (the Book Institute supported numerous translations of both books as part of the ©Poland Translation Programme).

Saturday evening, the audience had the opportunity to listen to poems by Tomasz Różycki and Wojciech Kudyba in the interpretation of the authors themselves, and earlier - in connection with the Year of Moniuszko - a meeting devoted to the first German biography of the composer, Der Tröster der Nation ("Comforter of the Nation") written by Rüdiger Ritter was held. The meeting was enriched by a concert featuring Anna Rad-Markowska (soprano), Adam Sanchez (tenor), and Silke Peterson (piano).

The International Book Fair in Leipzig is the second largest event of its kind in Germany after the Frankfurt book fair. It is attended by over 2600 exhibitors from all over the world. The honorary guest of the event this year is the Czech Republic.

This year's International Book Fair ended on Sunday. We would like to thank the Polish Institute in Berlin for their cooperation, and we hope that the next edition will be equally successful.

Next: Startuje Planeta Izabelin – nowa nagroda literacka Back to list