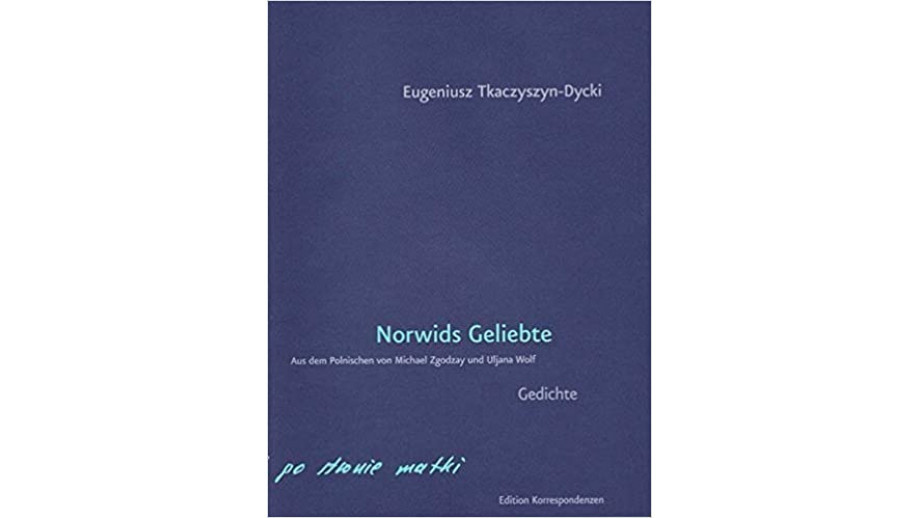 Eugeniusz Tkaczyszyn-Dycki's long list of literary achievements has been extended by a prestigious German distinction: the International Poetry Award granted by the city of Münster. The jury awarded the volume Norwids Geliebte, translated by Michael Zdgodzay and Uljana Wolf, which consisted of seventy-seven poems taken mainly from Kochanka Norwida (“Norwid's Lover”), nominated for the Nike Literary Award and published in 2014 by the Biuro Literackie publishing house. The book was published in German in 2019 with the support of the Book Institute’s ©Poland Translation Programme.

In justifying their choice, the jury mentioned "the relentlessly and obsessively recurring themes of death, illness, and Eros,” which are characteristic of Dycki's work, as well as a particular "sense of the explosive nature of contemporary social and historical processes in their profound dimensions," accompanied by a "relentless search for the true essence of poetry." Eugeniusz Tkaczyszyn-Dycki is the second, after Zbigniew Herbert, Polish artist awarded by the city of Münster.

For years, the poet's works have enjoyed great recognition beyond our western border, as evidenced by his texts being read at the most important German festivals: poesiefestival berlin and Literaturfestival Berlin. Dycki is known to German-speaking readers through the Austrian publishing house Edition Korrespondenzen, which has published three volumes by the author: Geschichte polnischer Familien translated by Doreen Daume as well as two books by the aforementioned duo (Michael Zdgodzay and Ulyana Wolf), Tumor linguae and Norwids Geliebte.

During the announcement of the verdict, the jury emphasised that they succeeded in the difficult task of translating Tkaczyszyn-Dycki's poems into German "with linguistic confidence, with an unerring sense of gesture, rhythm, and colour of the original." Even in their translation, these poems "continue to impress with their power of language, poetic force, and formal unyieldingness." The International Poetry Award of the City of Münster has been awarded every two years since 1993. The prize is €15,500 and is equally spilt between the author and the translators.

Born in Wólka Krowicka, the poet has published nine books at Biuro Literackie. The publisher opened the new year with the release of its latest volume, Ciało wiersza (“The Body of the Poem”), on January 11, 2021. Eugeniusz Tkaczyszyn-Dycki is a winner of the Kazimiera Iłłakowiczówna Award, the Józef Czechowicz Award, and the Hubert Burda Preis Award. He has twice won the Gdynia Literary Award. In 2009, he was honoured with the Nike Literary Award, and three years later - with the Silesius Award for the best book of 2011. He also received the Silesius Award for lifetime achievement in 2020.

Next: Bedside table #53. Marcel Woźniak: The inability to read everything is killing me Back to list