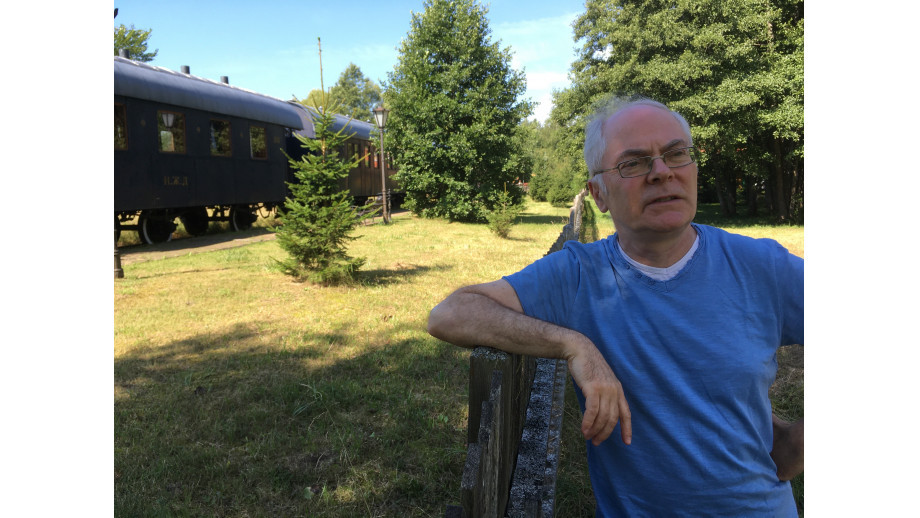 The prose writer Krzysztof Bielecki talks about the returns that hurt, failures that are most interesting in life, the revolutionary nature of Gabriel Garcia Marquez, the times in which he read and lived without moderation, moving poetry by Wojaczek, and the holiness of literature.

Do you have a bedside table?

Disaster? And why is that? What do you keep on it?

There is a lamp on it which ineffectively disperses the darkness and is now more important than the books lying there. I used to read more willingly before bedtime. Now, I have a feeling that whatever I would pick from there, whether it’s Houellebecq, Proust, Barnes, or Bahdaj, it will unsettle me. Books fill me with puzzling sadness.

Returns hurt. For instance, when you reach for Telemach w dżinsach (“Telemachus in Jeans”) years later, you realise the horribleness of the cliché that you are older than you used to be, and you may unwarily notice various imperfections in the literature read ‘centuries ago’. And I want to read to experience delights; to experience delights involuntarily - oh, how nicely it is written, how clever, what an unusual atmosphere.

And I always liked Bahdaj, I’ll go further: I was attached to him like a dog. He wrote about the kind of people I like to write about - the dreamers and losers. Because the most interesting thing in human life is failure.

Have you read anything recently that has been a particular enlightenment, delight, or disappointment for you?

I don't recall if anything delighted or disappointed me from beginning to end. When reading something, I try to see the effort of the writer. And what lurks behind it is moderation in judgment. I try to appreciate that someone wanted to write something more, better and deeper, even though they didn’t manage to.

Do you look for models of writing?

It may sound like I'm looking for something, but it's not the case. I think that if someone has written something in some way, then I should write differently. The language of others should not be mine. And this is the case: my language is looking for an island.

In your work, though, references to other writers or works happen quite often, for instance in the short story Gdyby Fiedia Dostojewski był idiotą (“If Fedya Dostoevsky Were an Idiot”). So, you use literature for support in a more or less obvious way.

Yes, it happens. But it's just a starting point. And somewhat an imperative. It's a kind of discursivity of constructing a picture or a thought: someone once wrote something, for example Milton, and how do you, Bielecki, look at it at the beginning of the 21st century? This used to attract me. Now, I rarely reach for this method.

Among the books you have read, are there any that have had a significant impact on you - they have strengthened your views or changed your way of thinking?

Well, I won't be original: I was very impressed by Gabriel Garcia Marquez's One Hundred Years of Solitude. One Hundred Years of Solitude was a revolution: a suddenly differently constructed world! This book appeared in Poland after other discoveries of America, of course Iberian America. One had already read Borges, Cortazar, Carpentier, Sabato, and unexpectedly, something came to hand that pushed the earlier delights into the shadows. It was a big hit; it was widely talked about. Reading One Hundred Years of Solitude was an experience, one could say a generational experience. If today I met my friends with whom I used to compete over who could read more Ibero-American or Balkan books, we would agree to admit that we are the children of One Hundred Years of Solitude. There was another significant book in those days - John Barth's The Sot-Weed Factor. It was also talked about. I also liked to travel far: Henry Fielding and Tobias Smollett, that is English literature of the 18th century, even before Dickens, and Spanish picaresque literature. Either way, I was reading without moderation at the time, and I think I was living without moderation too.

Does poetry have its place in it?

Of course it does! Poetry is a separate world. Poetry is beautiful by definition. Just how fine arts are fine by definition. Generally, poetry could be written in another language, so that people know that it is just different and do not dare to read it the way you read prose. One does not read poetry! There have been many different poets that passed through my life. Take for example those from the Balkans, such as Marko Ristić, Miodrag Pavlović, Tomaž Salamun, Dusan Matić. It was once quite fashionable poetry, if poetry can be fashionable at all.

Sure, they're ours through and through. They create worlds in our language. Their own - each poet has a different one - and ours - Polish. You know, a poet translates themselves into Polish.

Does someone prevail here?

On the one hand, the situation prevails. The breakthrough for me and for my generation was the Nobel Prize for Czeslaw Milosz. His work has accompanied me for years. First, I got to know it, grew to it, then I combined this poetry with his essays, translations, and prose attempts. But of course, I reach for many others, e.g. Grochowiak, Białoszewski, Stachura, and Leśmian. But it is Wojaczek who moves me. For me, to be moved is the paramount category in my experience of poetry.

Yes, Wojaczek took over my youth, and I have a growing esteem for my youth. Wojaczek opened the door with a bang and broke the windows - his poetry made a huge impression on us, entering adulthood in dirty times. And also his premature death... He was a legend. I want him to be a legend.

Is there anything in the latest Polish prose, poetry, or essays that you would like to change? Something that particularly bothers you?

Oh... the most important thing that bothers me is the attitude to literature. Allow me to be emotive, which I adore: I believe that literature, music, and fine arts are a certain type of holiness, and holiness feels great in temples. I do not worry about more difficult music, it has its temples and its holidays: Warszawska Jesień (‘Warsaw Autumn’ - the largest international Polish festival of contemporary music – translator’s note), Chopin and his Europe, Jazz na Starówce (International Outdoor Jazz Festival in the Warsaw Old Town – translator’s note). Besides, once respected names know how to return: Grażyna Bacewicz or Tomasz Sikorski.

The book doesn’t know how to return. It has become a disposable item. Like a plastic fork. It is given away for free, thrown away. Literature, metaphorically speaking, looks at it terrified. It is next to, I emphasise, next to the book. And to put it perversely, it would be better, definitely better, if the books were burnt, the forbidden ones, and the authors were burning at the stake. Meanwhile, no one dies. Books die unheroically. And literature needs heroism, influence, frenzy. Besides, literature is consumed by overt injustice. Often, the writers who should not be known are known. And many of the unknown should be known. But it is the scourge of this misbegotten world, the madness of marketing, whose nature is a lie, and the twilight of criticism. I think about the fatal decline of its importance, not about the lack of such critics like Kazimierz Wyka, Artur Sandauer, or Henryk Bereza, because now, there are also outstanding critics. And the next ones are coming. The futility of their mission means nothing to them. Because the world does not seek finesse. It gives up its ambitions. It is getting easier and easier. It takes shortcuts into the darkness. All it takes is one blogger's word on the Internet and the most excellent book is slaughtered like a piglet. Emotive?

Next: Biblioteka Śląska ma nową stronę internetową i wyszukiwarkę zasobów Back to list