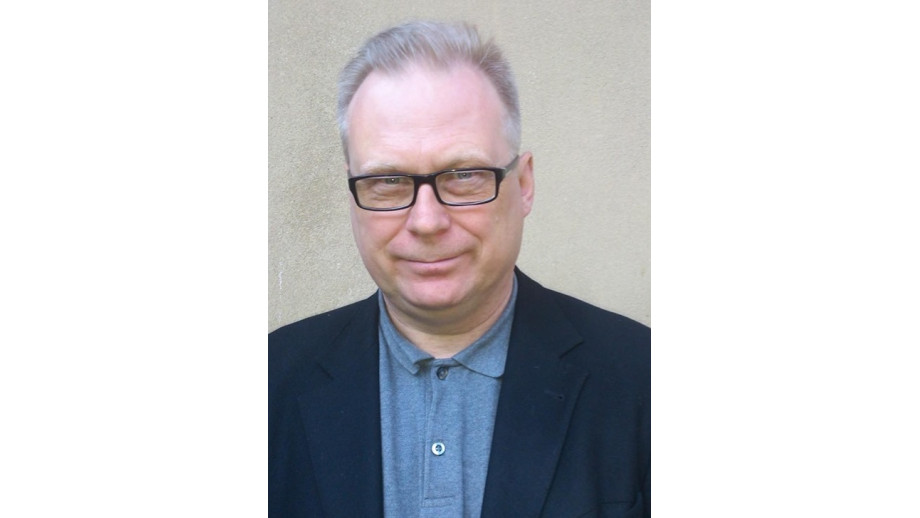 The prose writer and translator Piotr Siemion reveals what he has on his reading pile, tells us about his search for the ‘chimeric moment of joy’, a novel from which he remembers every word, as well as about a ‘disco novel’ and about what writing has in common with existence.

Tell us about your reading habits.

I read very little. Books lie everywhere. Such a domestic paradox. I read other writers. Bloody miniatures by Eliza Kącka about neighbours (Elizje [”Elisions”]). On the same pile, there are books about Mossad. This, in turn, is groundwork for what I provisionally call a ‘disco novel’. Next, Eyland by Sigridur Bjornsdottir about life in quarantine (ha ha!). Lord Jim in Kłobukowski's translation, so somewhat read from the beginning. Then the ones I barely started, Czarne słońce ("Black Sun") by Żulczyk, Turbopatriotyzm ("Turbopatriotism") by Marcin Napiórkowski, Akademia Pana Kleksa ("Mister Blot’s Academy") by Brzechwa, which we are reading with my kid. Małgorzata Sidz’s Kocie chrzciny ("Cat's Christening") about Finland. Mongolski cyrk ("Mongolian Circus") by Ewa Olejarz, the strangest poetry in the world. A printout of a novel to be published in England this year, I've got an embargo on the author's name and the title, though. And lots of issues of Harper's Magazine, which I bring over from the USA, one of the most interesting and oldest literary magazines in America. This picture indicates that (i) I read everything; (ii) I read books I need for some specific purpose; (iii) I read the titles published by friends; (iv) I read what my former students have written (I occasionally teach creative writing at the workshop by Czarne publishing house); (v) sometimes I advise friendly publishers as a hunting hound; (vi) I read what’s trendy, why not! And finally (vii), I'm still looking for something in this reading. And what is that? "A golden moment of joy" from Viktor Pelevin's novel about Buddha's Little Finger. Inspiration. The feeling that, although perhaps reading the book is like a hallucination lasting many hours, we are not alone in this hallucination, but collectively, together.

Tell us a few words about Harper's Magazine.

Harper's Magazine (not to be confused with the fashion magazine Harper's Bazaar) is America's best serious monthly magazine on art, politics, science, and literature. It's been in print since 1850. Almost all the greats published there. More importantly, the monthly is still able to get ahead of the times by printing new names. It was there that I first read D.F. Wallace’s and Ferrante's prose, but I also came across Szymborska's familiar poems.

How do you read the magazine: from cover to cover or selected titbits? Do you bind together a year’s issues?

I read everything, especially the book reviews. Harper's is more leftist, in a somewhat dreamy way than, say, Atlantic Monthly or The New Yorker, but with its irony and distance, it does not want to be a propaganda machine. I've been subscribing to it for 20 years, so there's a lot of issues from months and decades ago in the house. Dozens, maybe hundreds. I also have a digital subscription, but I use it mainly when I send my friends the more interesting articles as a PDF. It never occurred to me to bind subsequent year’s issues. I have this affliction that when I finally get things organised, catalogued, and bound, I never look into it afterwards, and I do like and want to look into Harper’s.

Is there, in your opinion, an equivalent of such a magazine in Poland?

To put it mildly, no. Would it be possible to found one? And finance generously for the next 170 years?

I might have pretended not to notice it so far, but it's high time to go back to what you said at the beginning. What is or will be a disco novel, for which you are also reading about Mossad?

Someone said that my Niskie Łąki (“Low Meadows”) is a novel about the end of youth. Following this lead, I would also like to write a novel about the end of childhood. In my biography, it was the end of the seventies (of the last century!), i.e. the disco era. It's not my fault that I used to bop to the rhythms of ABBA and BoneyM in a communist Wrocław, and not in New York's Club 54. Then, fortunately, the punk movement swept away all those crystal balls. That city of Wrocław was still a very strange city, with many mysteries bordering on international terrorism. Therefore Mossad. But, shhh.., no spoilers. And in the middle of all this, my pimply hero wearing bell-bottoms... I was in two minds whether a contemporary novel can count on a reaction not only from my generation, if the action is put half a century back in the past, or whether it necessarily has to be about the calendar modernity with its mobile props. I decided that since we are moved by the end of childhood even in the ancient Chłopcy z Placu Broni (“The Paul Street Boys”), I shouldn't be afraid of the old disco cosmos. I'm going for it!

Have you experienced literary delights recently?

Which book has impressed me so much lately? When I was little, I could cry with laughter at Švejk or Roman Bratny. Now, as a fallen doctor of philology and an experienced author of several books, I even read the Psalms of David or Nobel Prize winners with reluctance and scepticism. ‘Too much of this’, I say to myself, passing the bookshop window. I get lost in this mass, I forget what I've already read and what I haven’t. But for example, I remember every word from Buczkowski's Czarny potok ("Black Torrent"). Every single one of them. It means something to me.

I’m sorry, but I have to ask, what's funny about Bratny?

Are you serious? His later novels - I glanced at them once - are so full of male resentment straight out of Dzień świra (“Day of the Wacko”) that it is just squishing in the boots. The protagonist is a Polish Chuck Norris on sausages with steroids. Those were pretty hideous books, but so far-fetched that it made them beautiful. Beautiful, of course, as long as you're a portly boar in your fifties.

As a fallen doctor and experienced author, are you able to tell what this oversupply results from? Why does everyone have to write? Why do your students want to write?

Over the years, I have understood, and this is what I explain to my students, that it is really not about becoming ‘a writer’. An author of voluminous tomes, showcased at festivals and treating people with their weekly, clever, and witty column. This isn’t the way, I tell them. In fact, man is a narrative creature, so as long as you can build a narrative - hold the recipient by the button - it doesn't matter if you're going to write novels, scripts, comic books, a blog, or a good copy at the agency. The whole trick is to discover in oneself the demon of narrative, to learn to catch the reader by the button. And why do my youngsters want to write? Because they want to exist. If our existence is narrative, they want to be.

Do you see that surfeit and fatigue in them too?

Certainly. They're the attentive observers of our field. They use words such as ‘market’, ‘targeting’, ‘clique’, ‘corrupt criticism’, ‘cheapening’, or ‘sell of circulation’. I then clarify that the prize awaits them not in Warsaw or Gdynia, but in a question asked by a listener, a reader. And the question is, "Hey, what happened next?" And this is the biggest prize. If you can charm the reader, the rest will come alone.

Does it get more difficult with age to be delighted?

With age and the increasing number of books read, the compulsion of the professional reader begins. Like a skating judge, you instinctively give authors points for narrative ideas or for the boldness of language, subtract points for stereotypes and a lack of hearing - instead of simply reading. Reading too carefully is like driving on a bumpy road when you feel every unevenness of the text. It's a bit like with smells - as we get older, we can use better and better words to name them, which doesn't change the fact that our sense of smell has dulled. And the surfeit, fatigue at the very sight of display windows full of new writing discoveries, each of which is the best, the freshest, the most this and that? Then the only advice is to return to the classic. Read the Psalms, Antigone, even Mickiewicz. This is like the best detox. That’s what I do.

What did you read as a so-called lad, and what as a young man?

I read everything, of course. A lot about the war, that’s where my apocalyptic itch comes from. About travels along the Orinoco and to Croatia, then equally exotic. As a teenager, in turn, I discovered that the key to the shapeless and slightly totalitarian reality around me is held by post-war American authors, the absurd ones - Vonnegut, Heller, Barthelmy. They wrote a bit coarsely, but accurately, to the point, calling a spade a spade. A real cure for the newspeak of the People's Republic of Poland. I also started to read them in English then. It's a very old story. I also read poets, passionately; the more cursed they were the better. Dostoevsky too, alternated with Borowski's stories. But I also read the entire Bible (as a complete atheist), Homer, and Horace. Old volumes from the Wroclaw Institute of Classical Philology, where my mother still works. Looking back, I think a very strange palimpsest formed in my head from all this.

Where did the English editions of novels come from in the communist Poland?

Unbelievable, right? Obviously, not from a bookshop. Most often, from the British Council library. But it was a real hunt. I remember the Soviet edition of fragments from Jack Kerouac's On the Road with censored excerpts on sex, drugs, and hitchhiking. As usual, I had to help myself with my imagination.

And what does your eight-year-old son read? My daughter, for example, is not particularly interested in exploring literature on her own.

I’ve mentioned the demon of narrative before. My son Miłosz smoothly moves from Mister Blot’s to his own adventures in the digital game world of Minecraft, and then he draws a comic book about it. On the other hand, there is no attachment to the genre, series, ritual of reading. He is culturally omnivorous, but on a principle that I don't understand. He mixes English with Polish in an instinctive manner, natural for him. He hates Moomins (he won't tell me why). When it comes to literature, he's completely different from me. Something tells me it's a good different. It's certainly fascinating to me.