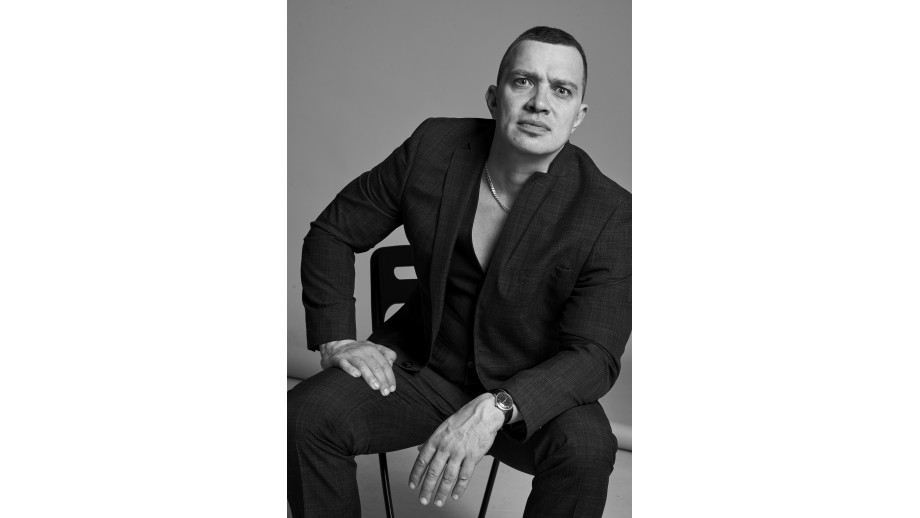 Bedside table #32. Łukasz Orbitowski: They say that whoever reads lives twice, and I’m running out of life

The writer Łukasz Orbitowski talks about his next readings, his lastest delights, the beginning of his adventure with books, the end of reading for pleasure, and he also reveals thanks to whom he became a writer and what deceased writers he would meet had he had the opportunity.

A book devoted to crime in pre-war Warsaw, I do not remember the title, and in my backpack, I have the latest volume of Elżbieta Cherezińska. This leads to the conclusion that I read for work, mainly professionally. I co-host a book show with Piotr Gociek, which means I have to read at least four books a month.

Not really. You know, I remember the days when I read three books a week. Elżbieta Cherezińska will be a guest on my TV show, and this is a thick and densely printed book. The idea of reading for pleasure is, in my case, essentially a thing of the past. But also no one imposes anything on me, the aforementioned book about Warsaw intrigued me - I talk on the radio about books that interest me, so it's not so bad, I don't feel forced.

Do you ever read anything for pleasure? What do you choose then?

Then I choose science fiction classics most often. This is one of the things I came back to after twenty or twenty-five years, because I read science fiction as a teenager. There is a fantastic series of Rebis (publishing house) in which they remind us of Flowers for Algernon, books by Robert Heinlein, Childhood’s End by Arthur C. Clarke. These are the books I pick for so-called fun.

What has delighted you lately?

Radek Rak and his Baśń o wężowym sercu albo wtóre słowo o Jakóbie Szeli (“The Tale of the Serpent's Heart or the Second Word on Jakób Szela”). A beautiful book published by Powergraph publishing house. The title does not lie, it is a tale about the Galician Slaughter, told by a fantasist who has already distanced himself from his imagination and stole the language from Leśmian. Beautiful book, amazing, really.

If you were to look more closely at some of the books that shaped you, do you remember the things that left their mark on you permanently, or something that made you think "I would like to tell such stories"?

Well, we have to return to horrors and Stephen King here. I became a writer because of such authors as King, Graham Masterton, James Herbert, or Clive Barker. When you're twelve, and you grow up at the end of the People's Republic of Poland, where imaginative literature is just a matter of a tale or a fairy tale, and suddenly, at the age of twelve you're reading something like ‘Salem’s Lot, and you don't know any horror films, your brain is at meltdown. Of course, now, I have a completely different attitude towards King and Masterton. They are not writers I would name as my favourite ones, but then, they pushed me to write. It is often the case that we are not pushed to creation by great people, but by the average ones – so, I will name two solid craftsmen, King and Masterton. There is no shame in that.

Then who would be among the great ones?

I value Iwaszkiewicz, I value Cormac McCarthy. I sometimes follow the fashion, because I got into David Foster Wallace a lot. It's hard to name your favourite authors, so let's stick to these three. Oh, and Flannery O'Connor, my discovery this year.

What kind of reader were you as a kid?

Chronic. My parents would give me a bollocking, because when on the way to holiday - with my parents, uncle, in Czechoslovakia, I think it was more of a Slovak region - we drove between the hills, they would call to me "look at this!”, and all I saw was a book. I was able to close one and immediately open another one, I read all the time. This is not the case now, of course.

Have you read to your sons?

I was able to get one of them to read.

In the course of punishment, when he was naughty, I took his phone away [laughs]. In fact, all the time I talked him into books, I showed him the value of reading, the beauty of reading, I never forced him. I have two sons - the younger one is completely reluctant; he won't reach for a book. The older one reads a lot. He asks for new books, and I think, I'll soon buy him ‘Salem’s Lot, because it's time.

Are there any books you'd like to catch up on?

Yeah, I'd love to read, for example, The Magic Mountain. I've never read it before. This shelf of shame is big. I haven't read Proust; I don't think I've read anything Turgenev. Everyone has some reading gaps, but only the reader is aware of them. They say that whoever reads lives twice, and I’m running out of life.

If you could meet a deceased writer, who would it be?

Does it have to be an outstanding writer? I would love to meet with Stach Przybyszewski or Ireneusz Iredyński, with people of this kind. So what if they didn't write top books? Life is more important than literature.

Next: „Księgi Jakubowe” in Ukrainian with the support of the Book Institute Back to list