The Transatlantyk Prize ceremony took place on Friday 22 June at 19.00. Antonia Lloyd-Jones became the 14th edition's prizewinner. The laurel was presented in the Manggha Museum of Japanese Art and Technology in Kraków.

The ceremony guests were greeted in MANGGHA by the director of the Book Institute, Dariusz Jaworski. In his welcoming speech, the director mentioned the 2008 Transatlantyk Prize winner Ksenia Starosielska, a great translator of Polish literature into Russian, who died on November 29, 2017. She was commemorated with a moment of silence.

After the director's speech, a laudation was given by Stanley Bill. The director of Polish Studies at Cambridge University started by explaining the translator's motives, which arise from – as he stressed – from zeal: 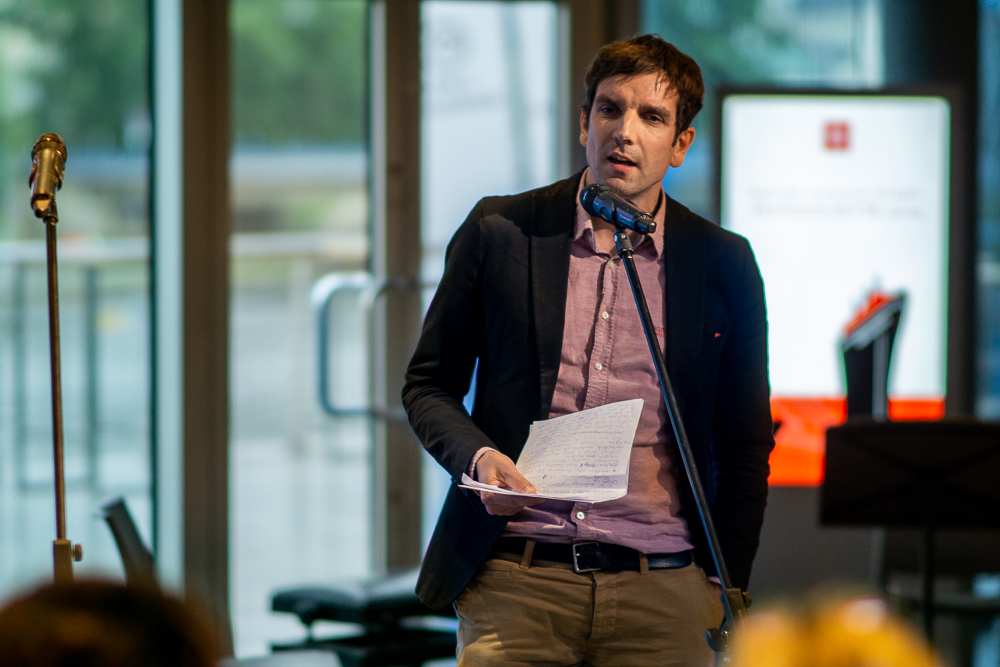 “From zeal stems the translator's deep conviction that something foreign, something belonging to a foreign culture has to exist in his or her own culture. This conviction that the influence of this culture, this literature – in this case Polish – on the native literature, the way of thinking about the world, the understanding of the world, the native tongue is simply necessary. It is a deep conviction that what Olga Tokarczuk, present here, and also Jacek Dehnel, Paweł Huelle, Wojciech Jagielski know and communicate about the world in their language should be introduced to English-speaking readers. It is thanks to this zeal of the translator that literature truly becomes a transnational phenomenon, but in the historical perspective this zeal also has a political dimension.

Our Transatlantyk prizewinner was aware of this from the very beginning of her path into Polish culture, when she began her studying Russian and Ancient Greek at the University of Oxford in the 1980s, and when in a particularly dramatic period she became interested in Polish culture and literature. In the times of the fight with communism, which greatly inspired her, and after 1990, in the period of incredible changes. She was convinced that in spite of the amazing accomplishments of the 20th century Polish literature, too little of this literature is present in the English language sphere. We know very well that there were always more translations from the languages of the so-called centres – of economy, of power – than from peripheral or half peripheral languages.

There is no justice in the world of literature. In this context the work of this brilliant translator of Polish literature into English, a translator of half peripheral literature – it is painful that we have to say this – into a language of the so-called centre, has not only a political dimension, but also an ethical one. It is a work of a person who wants the invisible to become visible. A work done in a deep conviction that what was invisible is necessary, because it is valuable in itself, but also because it has something important to say. Something that the English-speaking reader doesn't know, something that will change his way of looking at the world and their own life.

I am deeply convinced, or rather I know that nobody has done more for Polish literature in this field than this year's Transatlantyk prizewinner. This person is not only a translator, or even a promoter of Polish culture, or its ambassador. She is simply a one-person embassy of Polish culture in English-speaking countries. Antonia Lloyd-Jones is an institution. Modern Polish literature appeared in English largely thanks to her immense work. I would like to briefly mention the three main pillars of this work.

First and foremost: the translator's amazing, comprehensive body of work. Mostly comprised of contemporary literature, but not only. From Jarosław Iwaszkiewicz's short stories to the book favoured by the youngest member of my family:

The second pillar is the incredible work of promoting Polish literature, organising, conducting events and meetings with authors, informal ties with publishers. It is extremely important, because Antonia Lloyd-Jones is so in touch with Polish literature that everyone wants to talk with her about what's happening in this literature. She picks what she translates herself and she also suggests translations to others – doing so not according to a political key, she is interested in English-speaking readers, in what might interest them, what might interest publishers. Her output here is incredible and it brought Polis literature, as well as Poland, many successes. I don't want to mention it, since it doesn't belong to the translator's main tasks, but there is an element of soft power for the entire country hidden here. And Antonia Lloyd-Jones has played a very important role in this sense.

The third pillar is the work with the next generation of translators. She collaborates intensively, encourages, she is a mentor for a new generation and I'm very happy that many of her apprentices are present here. These people are already translating, already achieving successes. It is extremely important for Antonia, because she looks from this wider perspective.

I would like to quote the words of one of the people who nominated Antonia for this award: “Her style, or rather a range of styles in the English language, resulting from her tremendously extensive knowledge of literature and rarely encountered professionalism in its field in combination with her great sense for the Polish language, its registers, tones and contextual variations makes her a great writer. Thanks to her the voices of Polish writers sound vibrant and fully convincing in English.”

To conclude, I would like to quote the great French philosopher Paul Ricoeur, who wrote that: “Translation is the art of saving as much as possible.” When we are translating, we know that we will lose something, that we will lose a lot. We are going to lose the physicality of the original, we are going to lose certain contexts. But something can be saved and Antonia believes in it. She believes in the possibility of translation. She believes that translation is not only necessary, but also possible. She has saved a lot. She has built and is still building a mighty construction of contemporary Polish literature. For this we would like to thank.”

When accepting the award, Antonia Lloyd-Jones said: “This award is not only mine, it is also yours.” In her short speech, the prizewinner thanked the institute and its employees, with whom she has been working for years. She finished with a promise – given to Zygmunt Miłoszewski – that she is going to fix the shower in her London apartment.

Gratitude to Antonia Lloyd-Jones for her contribution to Polish literature promotion in English-speaking countries was expressed in the name of Polish writers and Polish literature by Olga Tokarczuk, a Man Booker International Prize winner, whose many books were translated into English by Lloyd-Jones.

At the end of the ceremony, director Dariusz Jaworski read a congratulatory letter from the Republic of Poland Ambassador to the United Kingdom, Arkady Rzegocki and Capella Cracoviensis played Wolfgang A. Mozart's concerto in A-major for a string quintet.