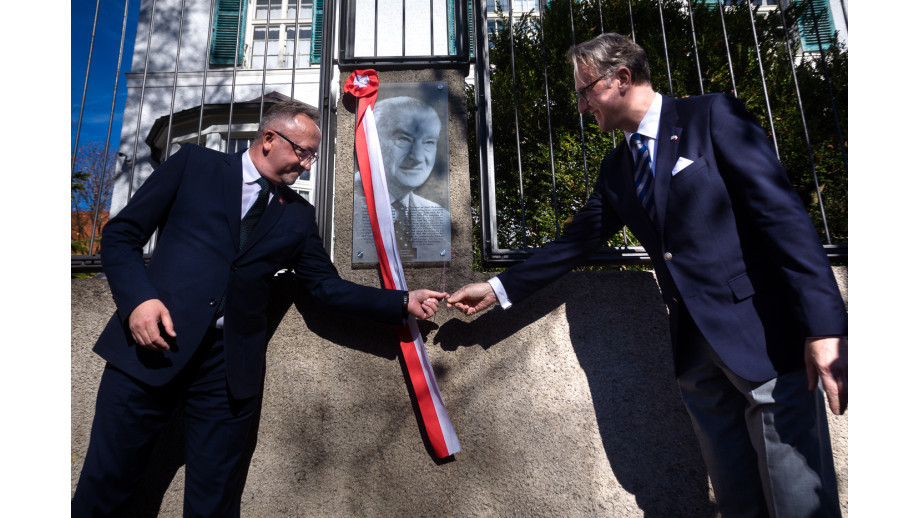 A plaque in memory of Józef Mackiewicz unveiled in Munich

A plaque commemorating Józef Mackiewicz was unveiled by the Consulate General in Munich on Sunday 16 October 2022, the Institute of National Remembrance reported. It was in this city that the author of Lewa wolna (“Clear on the Left”), lived from 1955 to 1985.

The ceremony of unveiling the plaque was attended, among others, by representatives of the Consulate General of the Republic of Poland in Munich with Consul Jan Malkiewicz and Joanna Malkiewicz and a delegation of the Institute of National Remembrance (IPN) - Deputy President of the IPN Prof. Karol Polejowski, and the Adviser to the President of the IPN Sławomir Cenckiewicz, PhD. The plaque unveiling ceremony was preceded by a mass in memory of Józef Mackiewicz in the Polish parish of St Joseph in Munich. The plaque was financed by the Institute of National Remembrance.

On the eve of the ceremony, a debate was held at the Consulate General of the Republic of Poland in Munich, dedicated to Józef Mackiewicz. Mackiewicz’s role as a writer and witness to 20th century history was discussed by Sebastian Pilarski, PhD, Slawomir Cenckiewicz, PhD, and Miroslaw Supruniuk, PhD. Guests at the meeting included representatives of the local Polish community. On the same day, an IPN delegation together with the Consul commemorated the Polish victims of the Dachau German concentration camp. Candles were lit and wreaths were laid at the mass burial sites of the murdered - the Dachau Cemetery and the Perlacher Forst Cemetery in Munich. Thanks to the cooperation of the Consulate General of the Republic of Poland in Munich and the Institute of National Remembrance, a renovated cross was erected at the Dachau Waldfriedhof cemetery, the restoration of which was funded by the IPN.

During the twelve years of its existence, a total of more than 200,000 people from countries in Europe occupied by the German Reich, including Poland, passed through the camp and its sub-camps. After the attack on Poland in September 1939, 13,000 prisoners from Poland were transported to Dachau. Some Polish scientists, arrested in November 1939 in Krakow, were also deported. 1,700 Polish priests were murdered in Dachau. By the liberation of the camp by the Americans on 29 April 1945, 41,500 people had died there, according to the museum. The Memorial on the site of the former camp was not established until twenty years after the end of the Second World War - in 1965, thanks to the efforts of former prisoners. Each year, it is visited by nearly one million people from all over the world.

The celebrations in Munich are part of the Year of Józef Mackiewicz established by the Polish Sejm. The resolution recalled that "Józef Mackiewicz, one of the greatest Polish writers in history, was born on 1 April 1902 in St Petersburg, and spent his childhood and youth in the Vilnius region". The 1930s saw the publication of his first literary works: novellas, a play, a crime novel, and a volume of reportage, Bunt rojstów (“The Rebellion of Marshes”).

In May 1943, after the discovery of the graves of Polish officers murdered by the Soviets in Katyn, at the invitation of the Germans and with the consent of the Polish underground authorities, Mackiewicz went to Katyn in the company of several other Polish writers as an observer of the exhumation of the bodies. In 1945, Mackiewicz emigrated from Poland.
He remained an implacable opponent of communist ideology to the end of his life. His life motto was the words "Only the truth is interesting".

In 1955, the Mackiewicz family moved from London to Munich, where they lived for the rest of their lives. Most of the writer's major works were written there: Droga donikąd ("The Road to Nowhere"), Karierowicz (“Careerist”), Kontra (“Contra”), Sprawa pułkownika Miasojedowa (“Colonel Miasoyedov’s Case”), Lewa wolna (“Clear on the Left”), as well as collections of essays and journalism, Zwycięstwo prowokacji ("Victory of Provocation”), Ściągaczki z szuflady Pana Boga (“Crib Sheets from God's Drawer”), Nie trzeba głośno mówić (“One Is Not Supposed to Speak Aloud”), W cieniu krzyża (“"In the Shadow of the Cross”), and Watykan w cieniu czerwonej gwiazdy (“The Vatican in the Shadow of the Red Star”).

Józef Mackiewicz died in Munich on 31 January 1985. He was the most widely published writer in the underground publications of the communist 'second circuit' (clandestine publishing).