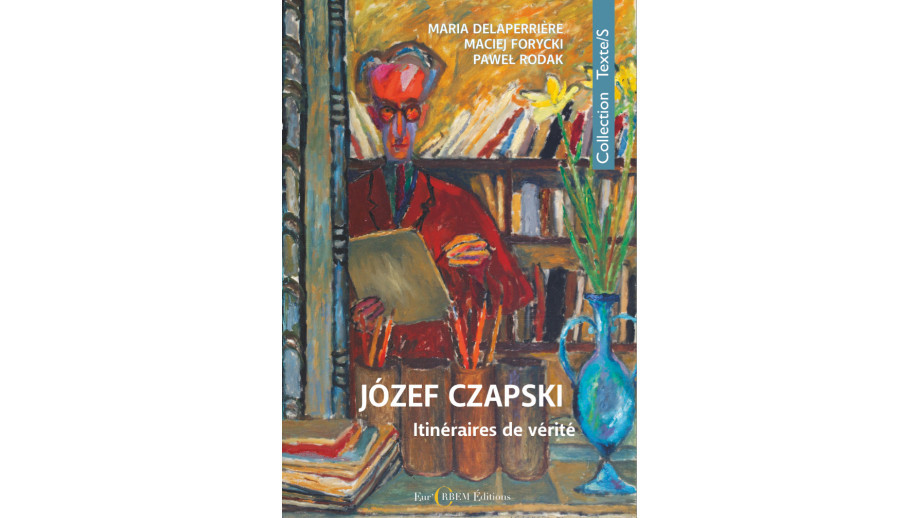 A book about Józef Czapski in French published in Paris

Józef Czapski's difficult-to-define heterogeneity does not obscure his always correct choices and impeccable moral stance. This is told by the authors of the essays that make up the book Józef Czapski, Itinéraires de vérité (“Trails of Truth”), which has just been published in French in Paris.

A pacifist decorated with the Virtuti Militari Order, who victoriously emerged from the clash with wartime nihilism and totalitarianism, a writer who was a painter, a diplomat of the Polish cause after World War II, one of the pillars of the Parisian "Kultura”...

As Piotr Mitzner writes, Czapski cannot be reduced to his most visible aspects, as this would impoverish his personality. He was someone who played a significant role in history and in thinking about history.

Czapski, an informed witness like no one else to the horrors of war, which he depicts with a pen as expressive as Goya's brush, is, at the same time, extremely sensitive to the manifestations of humanity, or to put it more simply, to the good - Henryk Woźniakowski finds the very essence of Czapski's character and thought.

He is perhaps best known to the world as the author of Na nieludzkiej ziemi (“The Inhuman Land”). Włodzimierz Bolecki emphasises that the title of the work on the inhumanity of Sovietism is an "extraordinary achievement" for it has entered not only Polish, but even universal historical consciousness. It has become one of the most important terms in the dictionary of 20th century history.

Rafał Habielski, analysing Czapski's wartime endeavours, reminds us of his dramatic letter to François Mauriac and Jacques Maritain, in which he included a complaint and an appeal of European nations, abandoned to the Soviet wolves. "If, for the sake of a game, a short-sighted policy or tactic, France, like other great nations, disregards their fate, it will cease to be in the eyes of the world what it was, the heir and exponent of a common tradition, the defender of universal ideas," he wrote. The novelist did not respond. And the philosopher, in one breath, did not forgive the Poles for "their anti-Semitism and attitude toward Russia."

In the background of the texts collected in the book, there is a profile of General de Gaulle, who even before the German invasion of the USSR tried, at the expense of the Poles, to reach an agreement with Stalin, who was the first Western leader to recognise the Government of Ignacy Daszyński.

Małgorzata Ptasińska recalls how the "intensification of the Cold War" caused Czapski, during a visit to the General at the end of 1948, to try to persuade him to become active on behalf of Poland, but for de Gaulle - as his guest put it in a report to General Anders - "the Polish question was frozen".

Czapski had no illusions, but his vision was far-reaching. In the 1950s, his friend, the historian Philippe Aries, who rubbed shoulders with the monarchists and heirs of the Action Française, in defiance of de Gaulle supported the radical supporters of French Algeria. Czapski, regardless of his moral standpoint, which Guillaume Gros equates to a pro-Dreyfus attitude, saw that de Gaulle was then the embodiment of the currents of history.

What deserves separate discussion are texts by Prof. Maria Delaperriere, who is the main editor of the book, Murielle Gagnebin, who can be regarded as the French discoverer of Czapski's painting, as well as the very personal memoirs of Richard Aeschlimann and Wojciech Karpiński, from which emerges the almost palpable greatness of this artistic, intellectual and moral authority.

Michał Masłowski, a professor emeritus at the Sorbonne, considered it a “miracle” that a book about Czapski appeared in French. In an interview with the Polish Press Agency (PAP), he recalled that the author of The Inhuman Land was not appreciated as a painter for a long time on the Seine, he was disliked for telling the truth about communism, as well as for being introduced to the circles of aristocracy and political elites, where his outstanding personality was respected.