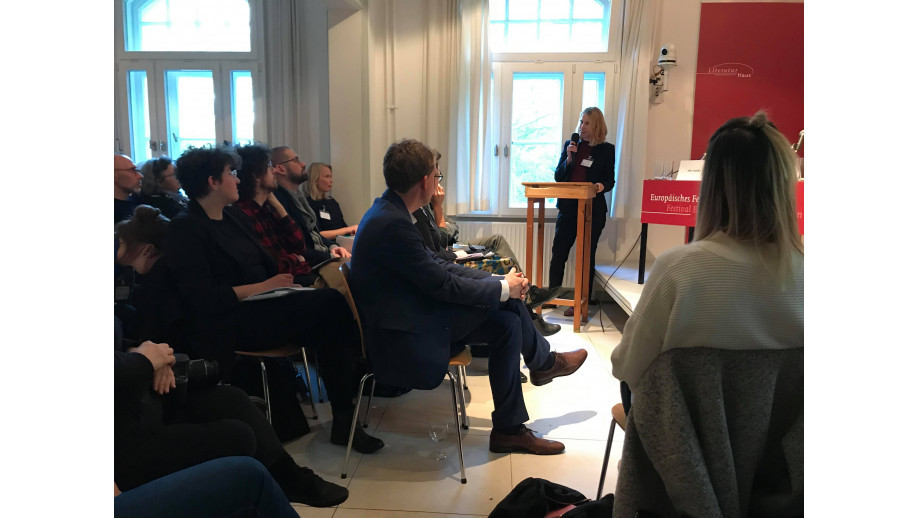 Twelve writers and their publishers came to the Kiel House of Literature last week to learn about each other's books for a few days, to present them to the public, and to share their experiences.

"Our industry evokes beautiful emotions, fascinates, and is addictive. However, it can be ruthless, full of broken hearts and disappointed hopes. What makes us stay in it is the daily adventure of getting to know another person: both in a face-to-face meeting and through the experience of reading. And this is where the festival's greatest strength lies," said Agnieszka Urbanowska, representative of the Book Institute, in her welcome speech to writers and editors. “These few days are not only meant to promote the work you have already done, but also to give you new energy for creative activity.

The programme of the event included: reading excerpts of texts in the participants' native languages and in German translations, presentation of books and discussions about them, as well as industry discussions.

This year's novels turned out to be mostly focused on interpersonal relations, especially family relations, while social and ideological issues were presented indirectly. What they also had in common was a first-person perspective, characteristic of debuts. The presence of the editors allowed us to look at publishing behind the scenes: what working on the text looked like, the promotion of the book, and finally how different the authors' paths leading to the debut were. Some were spotted on the Internet, others at creative writing courses, or at literary competitions. Some writers found their way to their publisher thanks to a recommendation of a common friend, others simply sent an unannounced manuscript, which did not always convince the editors from the beginning.

“Although I come from the film industry, which is completely different from the literary industry, I have written almost since forever," said Radka Franczak, the Polish representative and the author of Serce (“The Heart”).  "When I was twelve, my dad said: "You have so many emotions - start writing a diary. Maybe one day, you'll get a book out of it”, he added, handing her a notebook. "And indeed, I have been keeping my journal for most of my life.

The writer introduced the audience to the roles of Andrzej Wajda and Agnieszka Smoczyńska in the creation of her novel, she also spoke about the themes of emigration, patriotism understood as caring for nature around one another, and cultural differences within Europe. One of the things she wanted to take a closer look at in The Heart was an existential situation when a carer of an elderly person, a stranger at first, becomes someone close to them, accompanying them in dying.

On Thursday, Franczak also met with a group of Polish students from the Slavic Studies Department of the University of Kiel.

The European Festival of the First Novel is organised by the Schleswig-Holstein Literature House and the French Institute in Kiel in cooperation with the national cultural institutions of Europe, including the Book Institute.

Next: The Book Institute has supported the Spanish translation of Katarzyna Puzyńska's novel “Więcej czerwieni” Back to list