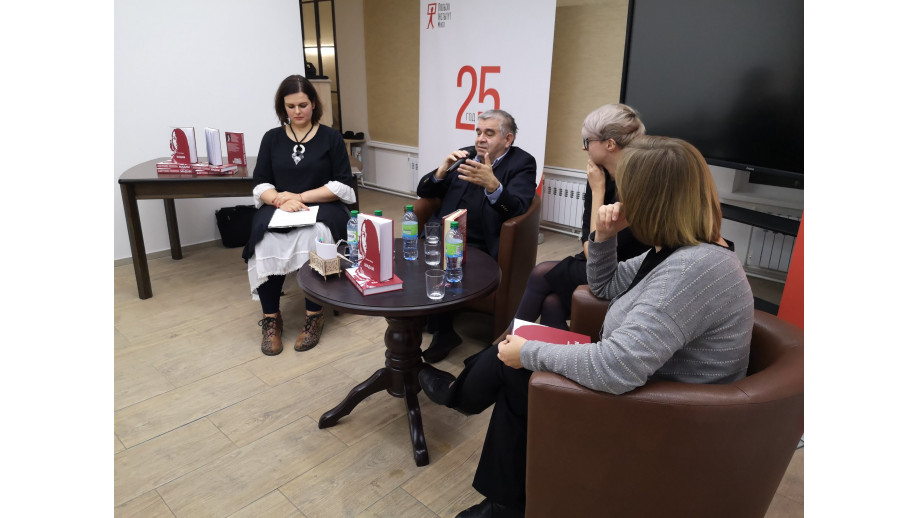 On Thursday, Minsk hosted a presentation of the translation of Antoni Libera’s novel Madame with the author’s participation, who visited the Belarusian capital at the invitation of the Book Institute. The meeting was organised by the Polish Institute in Minsk. The Belarusian translation of Madame was published by the Mastackaya Litaratura publishing house with the support of the Book Institute (as part of the ©Poland Translation Programme) and the Polish Institute in Minsk. The book was translated by Maryna Szoda.

"From the beginning, Madame was created as a parody of an educational novel, a bildungsroman. This joke is based on the fact that my hero lives in a degraded reality, in the reality of the People's Republic of Poland, and describes his stories in an extremely sophisticated language," Libera said during a meeting with readers in the capital of Belarus.

"The arch-model of this kind of parody is Don Quixote, a parody of a knightly romance," said the writer. To the intriguing question about the biographical themes in the book that the participants of the meeting were interested in, Libera replied that "of course many of the things described in the book had some kind of models in reality, although they were not necessarily seen or experienced situations.” "History and plot, however, are invented from start to end. As it should be in the novel,” he pointed out.

Speaking about his hero, Libera referred to Samuel Beckett, whose work he is an expert on. "He was asked who Godot was, and he said he didn't know. He also said he didn't know “if those who were waiting for him knew who he was." "When you write a work, it is in the very act of writing that it escapes the author, it becomes external," he judged.

The Belarusian translation of the novel by Maryna Szoda was published by Mastacka Literatura publishing house, 21 years after its Polish premiere. During the meeting, the translator talked about the great challenge of translating "Madame".

"It is a very demanding book, containing a huge number of allusions, references to world literature, and many quotations," said Szoda.

Finding Belarusian translations required a lot of patience and research, and some translations of poetry were created for the needs of the book, thanks to the support of Belarusian writer Andrei Khadanovich. The Belarusian edition of Madame is the twenty-first translation of this novel.

The translation was presented as part of the Polish Literature Month, currently in progress in Belarus. "The Polish Institute has been supporting the publication of Polish literature in the Belarusian language for many years. In many cases, these are the first editions at all, and we are very proud of that," said Cezary Karpiński, Director of the Polish Institute in Minsk, to the Polish Press Agency (PAP).

On Thursday, Antoni Libera visited the Belarusian Academy of Fine Arts, where he gave a lecture on the works of Samuel Beckett.

Next: Spanish translation of Olga Tokarczuk’s "Bieguni" with the support of the Book Institute Back to list