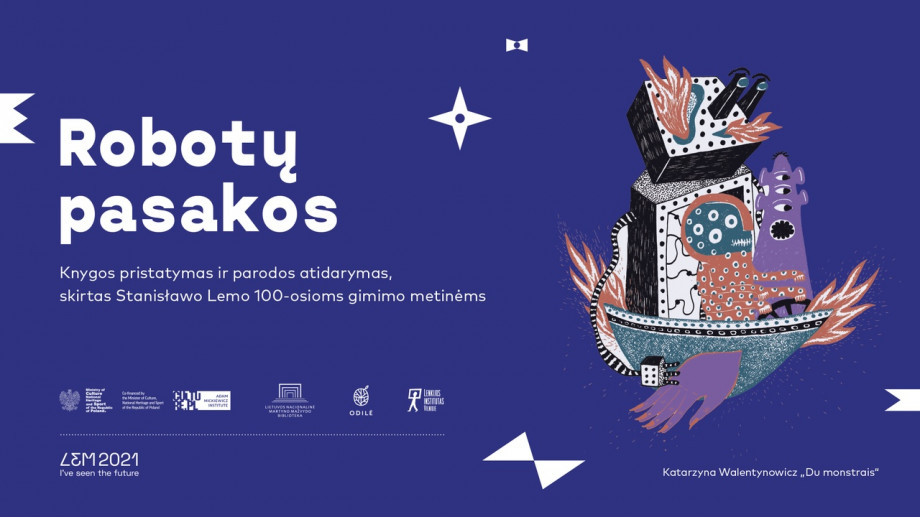 A collection of Stanisław Lem's short stories for young readers has been translated into Lithuanian. Thanks to the Adam Mickiewicz Institute and the Polish Institute in Vilnius, the first Lithuanian, richly illustrated edition of Bajki robotów (“Fables for Robots") has just been published. The premiere of the book is accompanied by an autumn exhibition of illustrations.

It has been 55 years since the first publication of Stanisław Lem's Fables for Robots. During this time, the world has changed significantly, and many of the writer’s visions of the future have come to fruition. How does Lem inspire the contemporary viewer, who is surrounded by artificial intelligence on an almost daily basis?

"In Poland, Fables for Robots belongs to the literary canon, while abroad, even among Lem's fans, including Lithuanian readers, this part of his work, full of witty humour and metaphors describing contemporary man, is still unknown. The Year of Lem and the celebrated centenary of his birth are a perfect opportunity to change that, " says the director of the Adam Mickiewicz Institute, Barbara Schabowska.

The book premiere took place on 19 September at 4 p.m., during the opening of the exhibition "Fables for Robots" at the Martynas Mažvydas National Library of Lithuania in Vilnius.

It featured illustrations used in the book by leading Polish artists, such as Edgar Bak, Katarzyna Bogucka, Zosia Dzierżawska, Gosia Herba, Rita Kaczmarska, Paweł Mildner, Dawid Ryski, and Katarzyna Walentynowicz. After its presentation in Lithuania, the exhibition will travel to Lviv, the city where Stanislaw Lem was born.

"Just as Lem never followed the beaten path, we are following in his footsteps and showing the illustrations in a different and unusual way. We expose their fragments, hide them in space, create new meanings. We create such conditions so that it is the participant of the exhibition who can change the boundaries of its world and create its rules anew," explains the curator, Magdalena Kłos-Podsiadło.

After the premiere in Vilnius, the book will be presented at the Book Fair in Klaipeda on 21st September under the slogan "In Focus: Stanislaw Lem 100″ with the participation of, among others, the translator Viktoras Tamošiūnas and Justinas Žilinskas, the author of the introduction to the Lithuanian edition of the book.

The Lithuanian edition of Fables for Robots was published by the Odilė publishing house in Vilnius, which has been popularising Polish literature and promoting the works of Polish authors in Lithuania for years. This is the second foreign edition of the publication this year, which was published thanks to the Adam Mickiewicz Institute. An Estonian translation was published in the spring, which was also accompanied by an exhibition of illustrations by Polish and Estonian artists. It was presented in Tallinn, Haapsal, and Tartu.

"The Polish Institute in Vilnius invites you to Vilnius and Klaipeda for events dedicated to the Lithuanian edition of Fables for Robots by Stanislaw Lem. We contributed to the creation of this book as sponsors of the translation by Viktoras Tamošiūnas and the translation of the exhibition itself; we are also coordinating the promotional campaign in Lithuania. Therefore, it is with pleasure and pride that we encourage you to see the exhibition in Vilnius and Klaipėda. And above all, we encourage you to read this wonderful book - cold days are approaching, dear electroknights, we must not let the grease freeze in our reading circuits!," said Dr Małgorzata Stefanowicz-Pecela, Director of the Polish Institute in Vilnius.

Next: Poland at the International Book Fair and Literary Festival Book World Prague Back to list