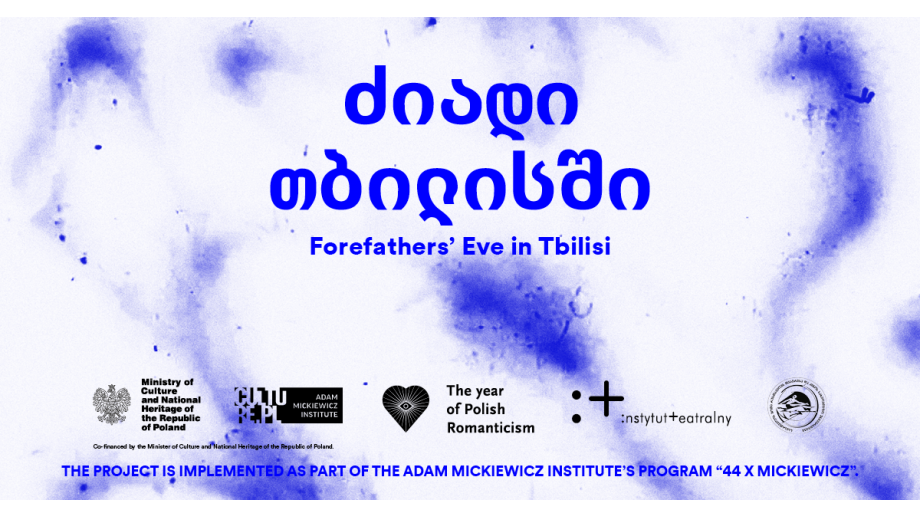 Adam Mickiewicz’s “Dziady” staged in Georgia for the first time

The performative reading of the second part of Adam Mickiewicz's Dziady (“Forefathers' Eve”) was its first public presentation in Georgia. It was held on Friday 18th November at the D. Aleksidze Theatre at the Shota Rustaveli Theatre and Film Georgia State University in Tbilisi. The remaining parts will be staged next year.

According to the Adam Mickiewicz Institute, this is also the first translation of Mickiewicz's work in its entirety into Georgian. It was translated by the translator of Polish literature Keti Kantaria and the poet Ana Kopaliani. The performance was directed by Andro Enukidze, who produced Chekhov's The Cherry Orchard in Poland at the Wanda Siemaszkowa Theatre in Rzeszów last year.

Enukidze told Polish Press Agency (PAP) and Polish Radio that the main message of Forefathers' Eve is that 'we are all in one world: the dead, the living, and those yet to be born. In every state we exist, we do not cease to be". He also said that although Georgians understand the ritual of ‘Dziady’ itself (Dziady [lit. "grandfathers, eldfathers"] – ancient Slavic rituals which relied on the belief that the living can commune with the souls of the dead – translator’s note), because it also took place in Georgian villages and mountains, they do not understand some aspects of it. He explained that they do not know, for example, why in Forefathers' Eve, children are in purgatory simply because they did not suffer during their lives. "We take it all with a pinch of salt, we stage the performance with a surprise that we don't hide," he added. In his opinion, whether a show can be described as interesting depends on how it is received by people outside Poland. He pointed out that despite working in Poland, his production of Forefathers' Eve falls into the tradition of Georgian theatre.

The assistant director and consultant on Polish matters is Paweł Rogalski. In an interview with the Polish Press Agency and Polish Radio, he said that the ritualism, the ceremonial nature inherent in the structure of Forefathers' Eve in the performance is borderline. "On the one hand, we are dealing with contemporary elements and, on the other hand, with respect for Mickiewicz," he explained. He added that the category of spectres and spirits or ghouls for Georgians is also part of their culture, they toast the dead, for instance. "The question of what the spectres or the ghouls would be for them," he considered. However, Slavic beliefs differ from those of the peoples of the Caucasus, he explained. "It was difficult for Georgians to imagine that besides hell and heaven there is also purgatory, and why children are in purgatory, because according to the Orthodox church, dead children go to Paradise," he said. "The Georgian language is completely different from the Slavic languages, the vibrations flow differently, words sound differently, the body works differently through words. There is also a different way of breathing, and that carries over into the dance," he recounted. He added that "a very common element in Georgia is mythologising, thinking about the world in terms of truths, half-truths, falsehoods. Many things are not said explicitly here; what is important is hidden somewhere in between. In Georgian culture, there is a great deal of meaning in how one speaks, looks, sits, moves," he explained. He also stressed that narrative is important in Georgian theatre. The work will not be word-based, but more in the body, relationship, and dynamics of the situation rather than in long monologues. Part II of the drama will be staged first. "We are planning - both the Polish and Georgian sides - to finalise the whole show with a grand performance next spring," Professor Artur Grabowski, the initiator of the project, told PAP.

"I hope that people in Poland will think that Forefathers' Eve is a universal text that can be read very well in foreign languages and foreign cultural contexts, and Georgians will be able to see our masterpiece of drama and poetry," he said, when asked about the aim of the performance. In Grabowski's opinion, Part II of the work is the most universal. As he explained, it is "both a religious and a folk ritual and, in that sense, undoubtedly universal, ritualistic at its roots"." I am convinced that every culture is capable of finding a parallel quasi-theatrical form that could be understood by that culture," he stressed.

"Last November, supported by the tools and organisation of the Theatre Institute in Warsaw, I organised a large international conference entitled. 'Wojtyla-Grotowski & Religious horizon of modern theatre and drama in Poland and in the world'. One of the guests was Giorgi Shalutashvili, dean of the Shota Rustaveli Theatre and Film Georgia State University in Tbilisi," Grabowski recounted. "We became friends quite quickly, started talking about the theatres and literature of our countries, and it immediately occurred to me that if we were to introduce ourselves in Georgia, it would be appropriate to start with the text that is most important to us, which is deeply universal in its entirety," he added.

Additionally, after liaising with Dean Shalutashvili, it transpired that the Polish Parliament had declared 2022 as the Year of Polish Romanticism. In view of this, the translation of Forefathers' Eve into Georgian and the stage adaptation were realised as part of the '44 x Mickiewicz' programme as part of the celebrations of the Year of Polish Romanticism of the Adam Mickiewicz Institute in collaboration with the Theatre Institute.