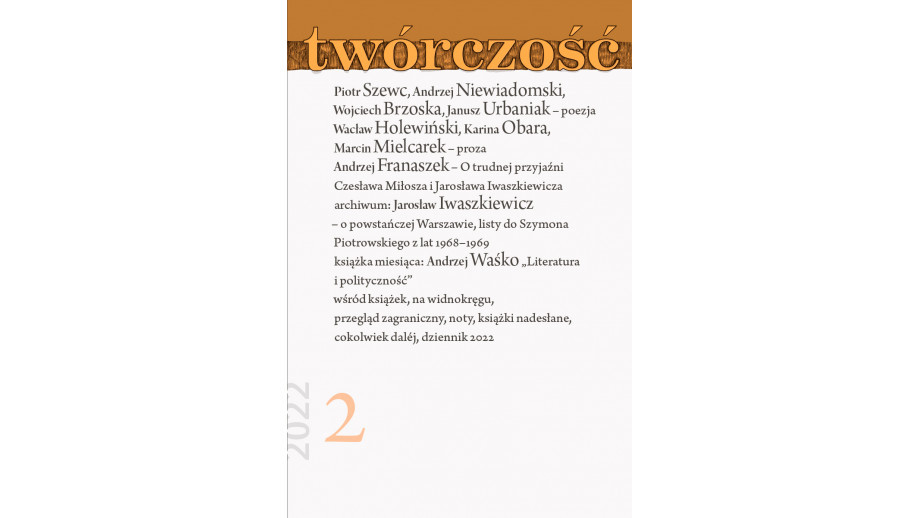 For years, the Ukrainian literary community has been in a state of double expectation: for the Nobel Prize in Literature and for a Great Novel.

While it is all perfectly straightforward with the Nobel – there is one, made of an indivisible piece of twenty-four carat gold (and, of course, a fair admixture of neo-imperial politics, because of which Ukraine still has no Nobel laureate of its own) - nothing certain is known about The Novel.

What should it be about? About history or about the present? About the individual, the family, or the Nation? (Correct answer: about all of it at once). Should it be intended more for domestic use, or should it aim for versatility? Are five hundred pages enough for a great Novel? And also: who should write it? Does it have to be someone from the contemporary classics, or is it rather the debutants who can bring out the heaviest guns today?

When Lina Kostenko, the greatest authority and undoubted classic of contemporary Ukrainian poetry, unexpectedly made her prose debut with Notes of a Ukrainian Madman, it was only her most ardent fans that insisted that this was The Novel (today even they seem to prefer to forget about the text). It was a different matter with Oksana Zabuzhko, a generation younger, who eagerly cast herself as the author of a great Novel, and, in 2009, she published the over 800-page The Museum of Abandoned Secrets. It is an incomparably better text than Kostenko's novel (already translated into several languages and honoured with the Angelus Literary Award), but it has also been the subject of a whole series of criticisms. Firstly, that the author took the postulate that a great Novel should be "about everything" too literally, and she actually tried to write a text about everything: there is history and contemporary times, the heroic history of the UPA (The Ukrainian Insurgent Army) and the terror of the KGB, feminism and politics, criticism of the Ukrainian oligarchy, and the hard work of an independent journalist in the era of President Kuchma; on top of that, of course, there is love. Secondly, that it is difficult to read: while on the scale of a short story or short novel Zabuzhko's breathless, somewhat exalted style with its endless sentences can still be digested, it is quite a challenge to get through 800 pages written in such a manner. Conclusion? No, this is not likely to be The Novel.

Four years later, in 2013, some critics eagerly hailed Yuriy Vynnychuk’s text The Tango of Death as The Novel, not long ago also published in Polish. This prose was meant to fill various "voids" in contemporary Ukrainian literature, which lacked both a text about interwar multicultural Lviv, and a strong, true story about the Holocaust; it also lacked (and still does) an intellectual crime story in the style of Eco. The result is a text somewhat akin to The Museum of Abandoned Secrets in terms of its thematic 'omnivorousness', but accompanied by an eclecticism of genre and style: for there is an attempt at the aforementioned intellectual crime story, spiced with mysticism (the storyline of a mysterious manuscript from the fantastic land of Arkanum, which in some insane way turns out to be connected to the notes of a tango played by prisoners in the Janowska concentration camp in German-occupied Lviv), there is a nostalgic tale of pre-war Lviv (this is the tale that most often evoked sighs from Polish readers on internet forums), there is the outline of a story about the Holocaust; there is also a story of love of a contemporary university professor for a student much younger than him. The reader who tries to put it all together in their head must feel slightly bewildered. Is this the price that we have to pay for further attempts in writing The Novel?

For years, The Novel has been expected from Yuri Andrukhovych, who has continued to stall his readers with successive volumes of essay writing, stylised as travelogues (e.g., Lexicon of Intimate Cities), sometimes as "parahistorical novels" (e.g., Lovers of Justice). Eventually, it happened, and in 2021, Andrukhovych published a "real novel" entitled Radio Night. It is the story of a radio DJ, a former rock musician who plays his favourite music and tells stories during his nightly broadcasts. As one might expect, this is a very introverted piece, somewhat fitting into our pandemic reality, for we hear the voice of a man locked in a cramped studio, reminiscing, playing sophisticated intellectual games and conscious of the fact that all the most important things have already happened, and that the future is rather a great void. In a sense, it is an 'encyclopaedia of Andrukhovych' in which we find what we know from his early novels: a slightly eccentric aesthete protagonist, non-conformism in the style of the counterculture of the 1970s-1990s, daring eroticism, juggling with knowledge from cultural history, etc. But there is also something new: the peace and sadness of a man entering the final phase of his life. Readers finally feel satisfied (Andrukhovych in his best form, and on top of that, no essays!), critics show off with extravagant interpretations, and yet the great Novel is still absent. Radio Night, this excellent but overly 'erudite', intimate, even slightly autistic text is clearly not suitable for such.

The ''waiting for The Novel'' situation would look rather quite pessimistic if it were not for Sofia Andrukhovych's Amadoka, published in 2020. This author is well known to Polish readers, as almost everything she has published to date has appeared in Polish: two books of short stories Women of Their Men and Salmon, as well as the novel Felix Austria. These are very different works, for there is a gulf between the psychological naturalism of the short stories and the decorated, slightly theatrical, slightly sensational fabric of the novel. So, it was not clear what to expect from Amadoka. (It was only hinted that the eponymous Amadoka was the huge, largest lake in Europe, which Herodotus believed was located somewhere in what is now Ukraine, and later cartographers, trusting Herodotus, politely included it on their maps until the 17th century, after which they stopped).

A volume of eight hundred and thirty pages was published, quite on the scale of the mythical lake. Where does the story begin? The protagonist is wounded during the war in eastern Ukraine, as a result of which he loses his memory; the woman who cares for him decides to tell him a story about himself, as well as about what preceded his appearance in the world. Except that she lies, she concocts a story, she creates the protagonist in her own way and to her own taste. "Amadoka," says Sofiya Andrukhovych, "is a novel not so much about events as about telling them. What is important here is not historical facts, not authenticity, but attempts to discover how we treat our own and others' memories...".

So, there are different, intertwining (but not disjointed, as in some of the texts discussed above) plots in the novel: the story of a Nazi policeman, a Ukrainian called Wasyl, who joins the auxiliary police for some purely practical reasons and then just as mechanically, almost accidentally, saves Jews (he's certainly not a heroic figure, but we also don't understand what he's like at all; it's hard to put him on a moral scale); there is also a documentary story of the writer Viktor Petrov, who was a sophisticated Ukrainian intellectual and, at the same time, an agent of Soviet intelligence. And again, our scales of judgement collapse.

So why is Amadoka an important text? It seems that Ukrainian society is entering a phase of re-reading its own history and identity very critically - in a much broader global context than before. A fairly recently published, but already renowned and widely discussed book by the prominent historian Yaroslav Hrytsak, Defeating the Past. The Global History of Ukraine is proof of this. Sofija Andrukhovych's novel is a grand and polyphonic narrative that opposes no less grand, but monologic narratives of the past brushed with one ideology or another. She asks questions about burning issues in recent Ukrainian history and makes it clear that there are no correct answers, and that our future depends on which option we choose; how we lead the story of ourselves. In addition, Amadoka is not at all a novel for domestic use, since it discusses mechanisms that operate more or less uniformly in all societies.

So, is Sofiya Andrukhovych's Amadoka a dream Ukrainian Novel? Shall I answer honestly? I hope not.

The text appeared in the February issue of the monthly magazine Twórczość, published by the Book Institute.