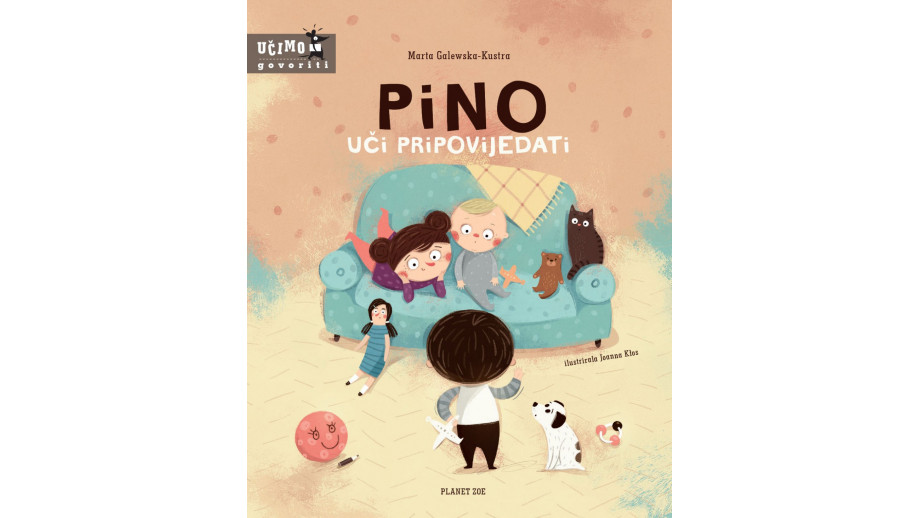 In Croatia, the translation of Pucio umie opowiadać  ("Paddy Can Tell Stories") by Marta Galewska-Kustra and illustrated by Joanna Kłos has been published. The book was translated by Marija Jelaska. The publication was supported by the Book Institute as part of the ©POLAND Translation Programme.

The book Pino uči pripovijedati , as reads the Croatian title, was published by the Planet Zoe publishing house in Velika Gorica.

Paddy Can Tell Stories is the fifth part of Paddy's adventures. It provides a great opportunity to practice storytelling skills for children who can already talk. This is encouraged by the adventures connected with the arrival of a new family member.

Underneath each large illustration, there are additional pictures that encourage children to describe the characters' experiences in their own words, as well as questions prompting a conversation with a parent about a topic of particular interest to every child: their own birth.

Storytelling requires, among other things, an understanding of cause and effect relationships and temporal relationships. We can help children by asking questions such as "What happened in the beginning?", "What did Paddy do next?", "Why?" and using the phrases "firstly", "later", "lastly". First and foremost, however, let your kids be independent in telling stories, asking questions, and explaining situations encountered in the book.

Marta Galewska-Kustra, PhD, is a speech therapist, child pedagogue, and creativity educator. She runs a speech therapy office for children in Łódź and works as an assistant professor at the Academy of Special Education in Warsaw. Author of a series of books supporting the development of children's speech, including the bestsellers Z muchą na luzie ćwiczymy buzie and Pucio uczy się mówić (“Paddy Learns to Talk”).

Joanna Kłos is a graduate of the Academy of Fine Arts in Krakow, with a degree in Graphic Design from the Poster Design Studio. She worked as a graphic designer for several years before finally leaving her ‘day job’ to pursue illustration. Together with her sister, she runs the Kalikayo doll studio. She loves chocolate with orange and hiking with her dogs.

Next: Targi Wydawców Katolickich pod koniec września Back to list